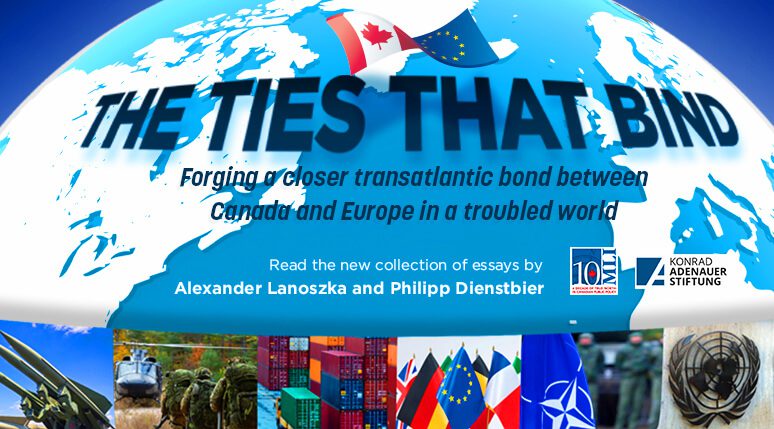 OTTAWA, ON (December 28, 2020): Canada and Europe are both facing a world rife with geopolitical uncertainty, from weakened international institutions to great power rivalry and rising authoritarian influence. What should an expanded Canadian role in transatlantic relations look like? What new opportunities are there for cooperation between Canada and Europe?

In the first essay, titled “More challenges than opportunities for Canada’s transatlantic relationships,” author Alexander Lanoszka explores the future of Canada’s approach to Europe under the incoming Biden presidency. While Biden will try to repair and strengthen the transatlantic ties that have frayed over the course of his predecessor’s mandate, this does not mean that challenges will not be in the offing.

“[M]atters of deep contention like trade will persist in transatlantic relations during the Biden presidency,” notes Lanoszka. In addition, “the United States has been steadily prioritizing the Indo-Pacific over Europe. The Trump administration has only sought to deepen that commitment and the trend will likely continue during Biden’s presidency.”

Both issues will likely create challenges for Canada’s approach to finding a renewed transatlantic role in the post-Trump era. Protectionist impulses are unlikely to recede in the United States. For Ottawa, the possibility of continued transatlantic discord on trade issues is bad news. Canadian decision-makers are also more comfortable in the North Atlantic policy space, meaning that the continued US focus on the Indo-Pacific may “pose certain difficulties for them.”

As Lanoszka concludes, “Canada will continue to play a role, as ever, in transatlantic relations but it will avoid any grand plans or initiatives too closely aligned with any one major European partner.”

The second essay, titled “Forging a closer transatlantic bond: Canada and Germany in times of US withdrawal,” argues that the transatlantic partnership will not be going back to rosy old times, even with an avowed multilateralist back in the White House. As author Philipp Dienstbier notes, we need to recognize the “larger strategic re-orientation” that is currently underway in the United States.

“Washington is embarking on a pivot to Asia and shifts the focus of its foreign and security policy to the Indo-Pacific, mostly because of China,” writes Dienstbier. “What is more, the US will want Europe to throw more weight behind efforts to counterbalance Russia and its aggressive foreign policy.”

Yet he also acknowledges that “the United States today still does most of the heavy-lifting in the alliance.” Even as we look at the range of possible threats facing the transatlantic relationship, we also need to be realistic when it comes to what we are able to achieve in the absence of the United States.

As Dienstbier adds, “overblown ideas of European strategic autonomy in security and defence that have been floated recently are unrealistic.” Yet, as he also acknowledges, the Alliance would benefit from “strengthening the Canadian and European pillars of the transatlantic alliance.”

He recommends a number of measures to help strengthen Canada and German transatlantic cooperation, including:

As he concludes, “Canada and Germany should strengthen their own capacity to act – not in order to go it alone but instead to support the transatlantic partnership better.”

The essay by Alexander Lanoszka was first published as individual commentary. We have combined it alongside the Dienstbier essay as part of a collection in this report. The Macdonald-Laurier Institute would also like to thank its partner in this project, the Konrad Adenauer Foundation, for their generous support.

Alexander Lanoszka is Assistant Professor in the Department of Political Science at the University of Waterloo and the Balsillie School of International Affairs. His research addresses alliance politics and military strategy, with a regional focus on Europe. Philipp Dienstbier is a Policy Advisor on Transatlantic Relations, and performs Division Analysis and Consulting for the Konrad-Adenauer-Stiftung (KAS).

Get ready for the ‘Roaring-back Twenties’: William Watson in the Financial Post

Innovation – Elusive, Hard to Measure but Essential: Philip Cross in the National Review

Innovation - Elusive, Hard to Measure but Essential: Philip Cross in the National Review