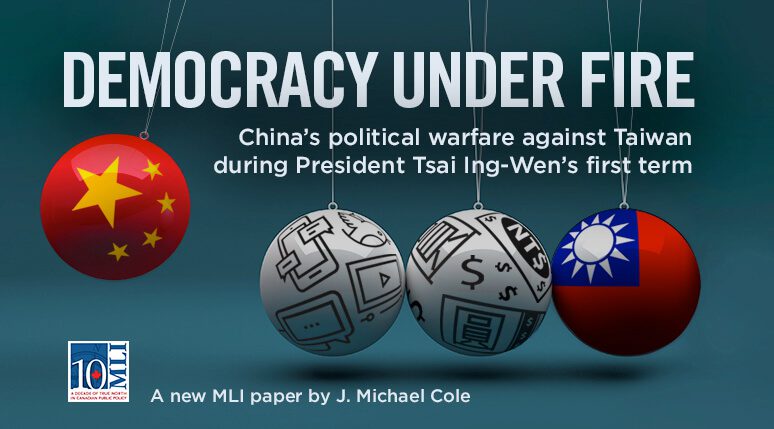 OTTAWA, ON (July 29, 2020): Since the arrest of Huawei CFO Meng Wanzhou on an extradition request from the US, Canada’s political class has become increasingly aware of the threat posed by Chinese political warfare – or “sharp power” – influence operations.

However, while Canadian policy-makers are now just waking up to this danger, Taiwan has long been subject to these sharp power attacks against its democracy. In MLI’s latest paper titled “Democracy Under Fire: China’s political warfare against Taiwan during President Tsai Ing-Wen’s first term,” MLI senior Fellow J. Michael Cole examines how Beijing’s sharp power influence operations against Taiwan have played out from 2016 to 2020.

China had relied more on non-coercive means to try to influence the previous Taiwanese government’s agenda. But the election of Tsai Ing-Wen signalled a turn in Beijing’s “strategy by renewing its focus on political warfare and military coercion,” explains Cole. As Beijing failed to get the political results it wanted with tactics such as economic incentives, China instead turned to coercive action.

The paper explores how a broad array of activities coordinated by China’s United Front Work Department through a variety of proxy organizations are directed toward all elements of Taiwanese society to exercise Beijing’s authoritarian influence.

“The CCP has sought to ‘Lebanonize’ or ‘balkanize’ Taiwanese society and its body politic,” notes Cole. “Efforts to do so increased markedly following Tsai Ing-wen’s 2016 election.”

By the end of 2019, the Tsai administration introduced legislation that reduced loopholes and empowered intelligence and law enforcement agencies to combat Chinese interference in advance of the 2020 Taiwanese election. In particular, Taiwan’s Anti-Infiltration Act provided teeth for the government’s efforts to combat foreign interference from Beijing.

While Taiwan faces more acute and existential challenges than Canada, Cole argues that Canadian policy-makers can benefit greatly from learning from and engaging with Taiwan. Some of these lessons include learning how to counter:

Despite being on the frontline of Beijing’s sharp power operations, “Taiwan has demonstrated that it is possible to stand up to Chinese intimidation and continue to prosper, both economically and in the quality of its democracy,” writes Cole.

“Resilience and commitment to a non-negotiable bottom line is probably the most important lesson that Canadians and the citizens of other targeted democracies can learn from Taiwan’s experience with Chinese interference.”

J. Michael Cole is a Taipei-based senior fellow with the Macdonald-Laurier Institute, senior fellow with the China Policy Institute, University of Nottingham, associate researcher with the French Centre for Research on Contemporary China, chief editor of Taiwan Sentinel, and assistant coordinator of the Forum 2000’s China working group. Prior to moving to Taiwan in 2005, he was an intelligence officer for the Canadian Security Intelligence Service in Ottawa