in Latest News, Past Events, Uncategorized
Reading Time: 2 mins read
A A

Ottawa’s business, trade and diplomatic community came together on Thursday Oct. 30 for an MLI breakfast event to discuss new prospects for the Trans-Pacific Partnership. The event, hosted by the Macdonald-Laurier Institute in co-operation with Dawson Strategic and the Taipei Economic and Cultural Office in Ottawa, was an opportunity for attendees to hear from top experts on some of Canada’s most important trade opportunities.

With TPP negotiations continuing in Australia, New Zealand High Commissioner Simon Tucker told a full room at the Rideau Club that he could sense that “momentum has tipped upward”. He continued to say that the “TPP will grow over time, and Canada’s trade opportunities will grow with it”.

The group then discussed what will come after negotiations conclude with the original 12 member countries, including prospects for South Korea, the Philippines and Taiwan.

Trade expert and Macdonald-Laurier Institute Senior Fellow Laura Dawson reported on some of the findings of her new paper, Finding the Hidden Dragon, on increasing opportunities for trade with Taiwan, and the prospects for Taiwan joining TPP negotiations in the future. She told the audience, “Taiwan is all the things you want in a trade relationship with China, and none of the things you don’t want”. 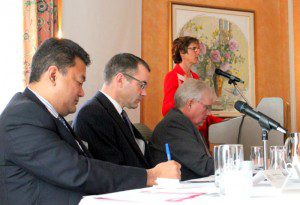 The event was moderated by MLI Managing Director Brian Lee Crowley and introductory remarks were made by Dean Allison, Member of Parliament and Chair of the Standing Committee on Foreign Affairs and International Development, and Ambassador Bruce Linghu, representative of the Taipei Economic and Cultural Office in Canada.

Eric Tamayo, Minister and Consul, Embassy of the Republic of the Philippines

Crowley in the Globe: Obama needs the authority to get a TPP deal done