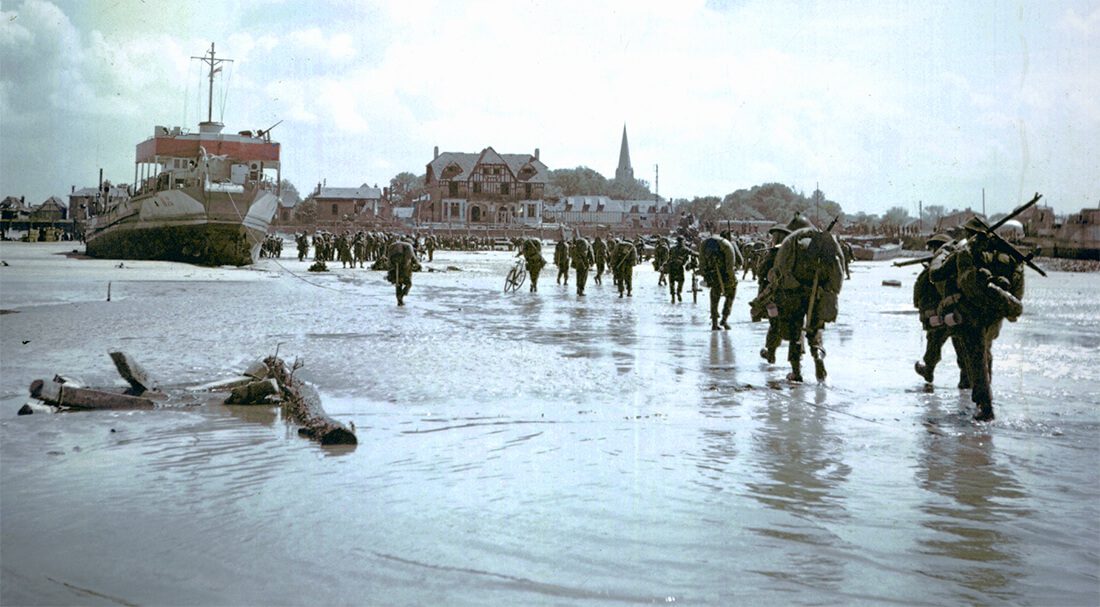 Unfortunately, the history of Canada’s critical contribution at D-Day has become forgotten, despite its importance, writes Richard Shimooka.

It was a cold day in Saskatchewan in January 1942, when 24-year-old Randal Hanson walked into his local recruitment centre in Hinchliffe. While he was slightly older than most men joining the military, Randal represented a fairly typical cross-section of Canada’s population at the time. He was a farmer, physically robust, with knowledge of how to drive and shoot a rifle.

By July 1943, he was posted to England with C Company, Royal Regina Rifles, and started training for what would eventually become D-Day. He was part of the 3rd Canadian Division, a powerful formation selected by British General Bernard Montgomery to be in the first wave of landings. Montgomery had witnessed the excellent performance of Canadians first-hand in the difficult Italian Campaign, and valued their contribution.

He ensured the 3rd was given the best equipment and training possible for their landing at Juno Beach in Normandy. Still, the men were sanguine about their chances of survival. A few days before the invasion, five men in Randal’s company gathered for a few drinks. Three, all in their mid-twenties, thought they may last a few days, or never return. Two, both 18, thought they would make it to Berlin: they were dead by the end of the week.

They had good reason for their fear; Juno Beach was arguably one of the most important sectors. It sat astride from the Caen Bayeux road, which Allied planners anticipated would be the primary thrust of Germany’s counterattack. They were right. By the evening of June 6, three panzer divisions, some of the best units in Hitler’s army, would be hurled towards Juno Beach. Men like Randal would face them head-on in a desperate series of battles in little towns like Bretteville-l’Orgueilleuse and Norrey-en Bessin. It was estimated that 250 men of his company held off a regiment of 1,000 soldiers. Their training, equipment, professionalism and bravery helped them carry the day.

The 3rd Canadian Division would break the back of the assault, helping to provide time and space for the massive Allied buildup that would eventually retake France. It was followed by hard battles across Europe and the Pacific. Randal would be shot three times over five days. He left his post only when his wounds became severely infected, requiring him to be sent to England. While he never returned to Europe, many suspected that Normandy remained with him for the rest of his life. He returned from war colder and distant, but refused to speak about his experiences until near his death.

Unfortunately, the history of Canada’s critical contribution at D-Day has become forgotten, despite its importance. Perhaps it is due in part to the reluctance of many soldiers, like Randal, to speak about their experiences. In the Cold War years, Canada’s role was played down in comparison to other allies. Over the past few decades, a number of authors like Marc Milner, Terry Copp and Mark Zuehlke have corrected that record with excellent histories that reveal Canada’s critical contribution.

In some way, however, the county itself has moved on. The number of people who witnessed D-Day has dwindled, fraying that direct link to the event. Conversely, many other countries have been able to maintain public consciousness of similar events; the French and Dutch arguably are more aware of Canada’s contribution to liberating their countries than Canadians themselves.

The story of Randal and the 3rd Canadian Division resonates because it still exemplifies the Canadian Armed Forces. As in 1944, Canadian servicemen and women today are widely regarded internationally for their high levels of professionalism, training and personal commitment: the same qualities valued by Montgomery. Canada’s involvement in international operations usually starts with allies requesting our assistance. Unfortunately, like with D-Day, our soldiers’ contributions and sacrifices are hidden from view. Modern battles like Panjwai or Medak barely register within the public’s consciousness.

Remembering Canada’s contribution at D-Day should not be intended to glorify war. Rather it reminds present political leaders of the terrible cost associated with committing Canadian soldiers to hostile action. It should also prompt us to provide the utmost for our veterans, given the commitment and sacrifice they have made. It is the very least we can do to honour their service and achievements.

Richard Shimooka is a senior fellow at the Macdonald-Laurier Institute. Randal Hanson was his grandfather-in-law.