According to Jerome Gessaroli, electric vehicle subsidies are far less cost-effective than other policies at reducing greenhouse gas emissions. 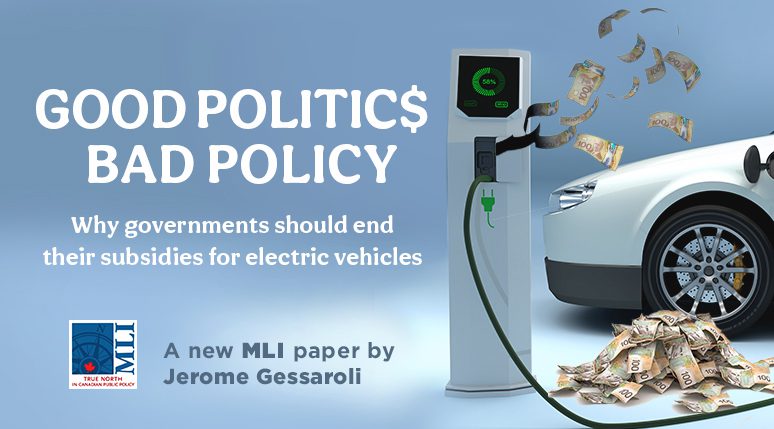 OTTAWA, ON (March 16, 2022): Climate change is a serious global threat, one which the federal government has introduced a wide range of policies to combat. Yet is Ottawa pursuing the right policies to achieve the highest possible reduction of greenhouse gas (GHG) emissions per dollar spent?

In “Good politics, bad policy: Why governments should end their subsidies for electric vehicles” MLI Visiting Fellow Jerome Gessaroli evaluates Canada’s subsidies on electric vehicle (EV) and electric charging station sales. The paper questions the cost effectiveness of these subsidies at reducing GHG emissions and whether they are equitable for all Canadians to access.

Electric vehicles are expensive – in Canada they cost from $12,500 to $25,000 more than equivalent gas models. As a result, these government subsidies benefit mainly higher-income households, who make up a large portion of those purchasing EVs. Gessaroli finds this troubling, writing that “those least needing the subsidies receive money that is paid by tax revenue generated by all taxpayers.”

Some also think that subsidies should be made to build out public charging sites. Yet, as the author notes, their development should be left to the private sector to avoid further misallocation of government resources. Indeed, businesses are already building out the charging station infrastructure needed to accommodate EV vehicles.

After examining the expected reduction of GHG emissions from EVs, the cost of both the provincial and federal subsidies, and the social cost of carbon, Gessaroli concludes that the subsidy programs are costly, inefficient and disproportionately benefit higher-income households.

Ultimately, the author suggests the government should let the carbon tax work rather than implement policies like EV subsidies that largely benefit higher-income Canadians. Indeed, other carbon abatement methods – such as enhanced methane regulations, large-scale solar power, gasoline taxes, and advanced nuclear – have much lower costs relative to their emissions reductions.

As Gessaroli concludes, “the federal government and those provincial governments that currently subsidize EV sales should end their subsidies and focus on more cost-effective GHG emission abatement policies.”

***
Jerome Gessaroli teaches at the British Columbia Institute of Technology and is a Visiting Fellow at the Macdonald-Laurier Institute. He writes on economic and environmental matters from a market-based principles perspective.