A communications strategy that meets the needs of Canadians: New MLI paper 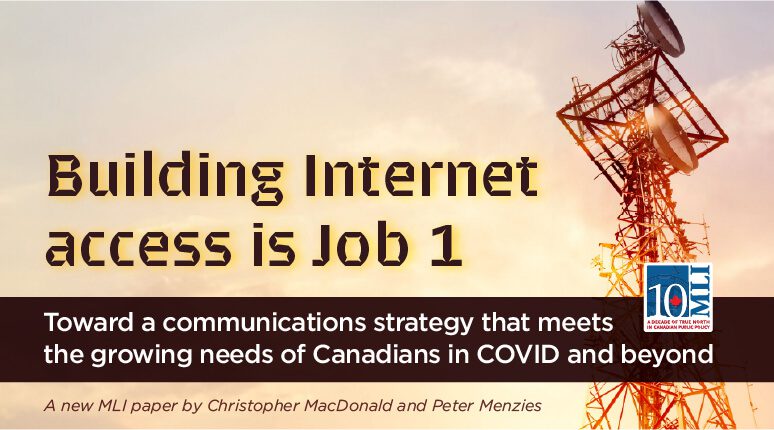 OTTAWA, ON (November 5, 2020): This week, the federal government tabled its plan to bring streaming services like Netflix under regulation of the Canadian Radio-television and Telecommunications Commission (CRTC), and to secure revenues to support Canadian content.

However, according to Peter Menzies and Chris MacDonald, authors of a new MLI report, the proposed legislation does nothing to address the real priorities Canada should have when it comes to telecommunications, namely access and affordability.

“It is troubling that at this time – particularly when the pandemic has made the need for online connectivity so obvious – policy discussions continue to focus on the narrow needs of a handful of interest groups,” says Menzies.

In MLI’s paper titled “Building Internet access is Job 1: Towards a communications strategy that meets the growing needs of Canadians in COVID and beyond,” veteran industry analysts and former CRTC commissioners MacDonald and Menzies suggest that the federal government’s fixation with using the CRTC to coerce companies into developing Canadian content misses the forest for the trees.

“What is carried on information networks – whether they be over the air, cable, cellular, Wi-Fi, satellite, or fibre – is subordinate to the needs of all Canadians, no matter where they live, to be able to access the digital world at a price they can afford so that they can participate,” write MacDonald and Menzies. “And when it comes to entertainment, their priority is to be able to watch what they want, when they want, and how they want.”

MacDonald and Menzies argue that the government should instead focus on the following priorities:

Increasing Internet and cell service access will help Canada level the playing field for remote, Northern, and low-income households who are increasingly being left behind in the digital economy. Allowing for greater competition in the market will reduce prices for Canadians.

However, as developing infrastructure and reducing prices are fundamentally at odds with one another, a balancing act must be achieved based on a core set of goals that harmonize regulatory decisions with market forces. MacDonald and Menzies stress the importance of encouraging “facilities-based” competition which encourages service providers to make the necessary investments in infrastructure.

“Sometimes trade-offs need to be made, but decision-makers must not advance one position without considering its impact on other key priorities such as network investment and affordability,” write MacDonald and Menzies.

By codifying net neutrality and increasing public access to CRTC processes, consumer interests (rather than narrow special interests) can be better protected. Furthermore, MacDonald and Menzies urge the government to establish that unfettered access to legal content over the Internet is fundamental to Canada’s democracy and civil society, and that the Internet ought to be exempted from traditional broadcast legislation, contrary to the new bill.

As the authors explain, “the focus of any government in tune with 21st century realities must be the Internet, its freedom, its availability, and its price.”

Finally, the authors recommend significant reforms to the CRTC’s governance structure, renaming it the “Canadian Communications Commission”, and having it report to Parliament through the Department of Innovation, Science and Economic Development (ISED) rather than through the culture and Cancon-focused Department of Canadian Heritage.

To learn more about what the priorities should be for Canada’s communications legislation, read the full paper here.

Peter Menzies is a Senior Fellow with the Macdonald-Laurier Institute, where he specializes in communications policy. He spent almost 10 years as a member of the CRTC, first as a part-time member, then as Alberta and Northwest Territories commissioner, and then as vice chair of Telecommunications.

An Election Day Like No Other: Elliot Tepper on CTV News