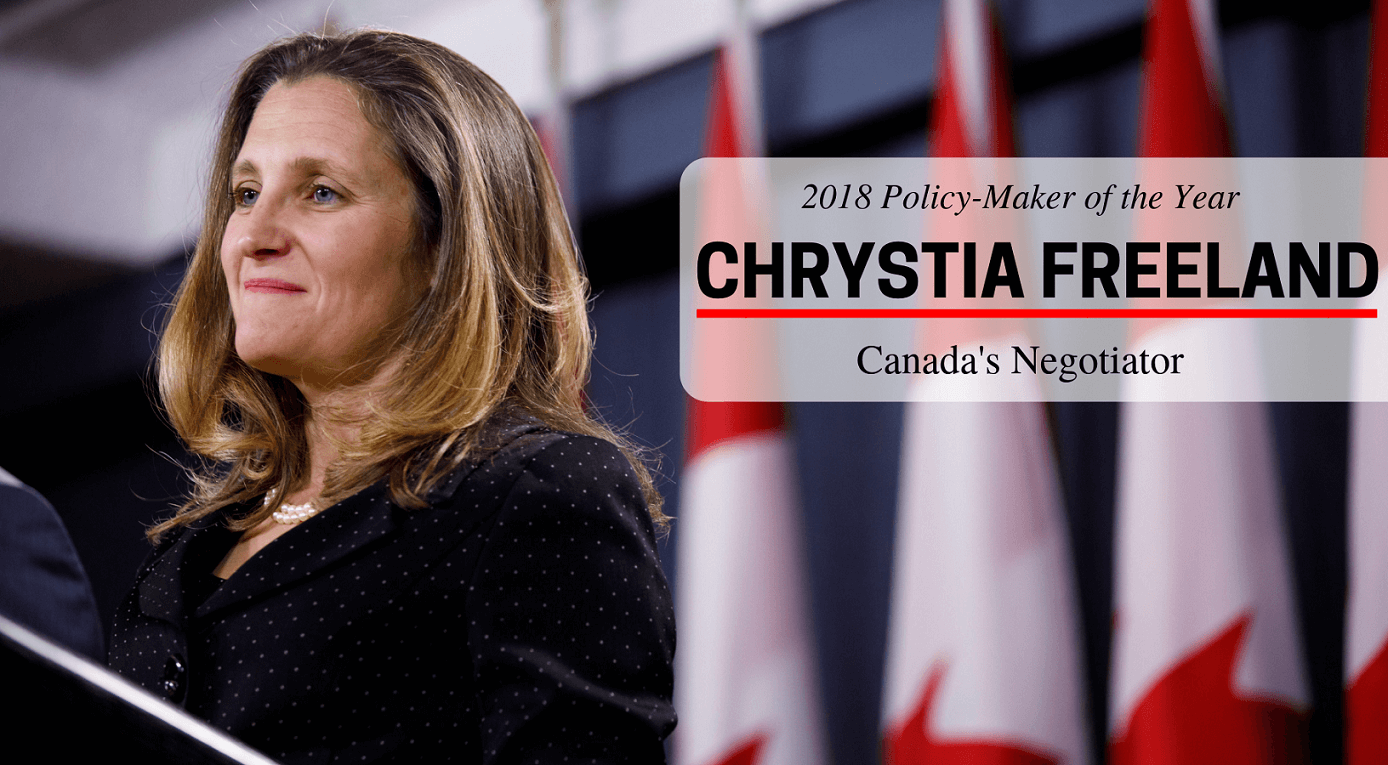 Freeland’s leadership on human rights and security has made it easy to select her as MLI’s Policy-Maker of the Year, writes Marcus Kolga for Inside Policy.

Chrystia Freeland has put Canadian foreign policy back on track, making Canada a leader on several foreign policy fronts like human rights, security, and working with Canada’s allies to maintain the rule-based order. Despite Canadians self-identifying their government as promoting human rights and democratic freedoms, principled foreign policy has not always been a priority for previous governments.

Throughout the 1990s and early 2000s, Canada’s foreign policy was primarily interests-based with little attention paid to human rights. Among the most tragic example, was the Chrétien government’s refusal to send Canadian troops or even intervene within the UN in order to stop the 1994 genocide of Tutsis in Rwanda.

Chrystia Freeland has put Canadian foreign policy back on track, making Canada a leader on several foreign policy fronts like human rights, security, and working with Canada’s allies to maintain the rule-based order. Despite Canadians self-identifying their government as promoting human rights and democratic freedoms, principled foreign policy has not always been a priority for previous governments.

The shift towards a value-based foreign policy began with Paul Martin and became dominant under Stephen Harper, whose stand against the Kremlin’s aggression in Ukraine and Russia’s appalling domestic human rights record is well known.

On the eve of the 2015 federal election, the Liberal Party made a commitment regarding the direction of their foreign policy on human rights under a Trudeau government. If elected, they promised to continue their “support for Ukraine’s Euro-Atlantic integration and in particular, Ukraine’s admission into NATO,” and promised to “continue to strongly condemn Russia’s belligerent actions against Ukraine.” Russian human rights abusers were also put on notice by a Liberal commitment to adopt US-style Magnitsky legislation to place targeted sanctions – asset freezes and visa bans – on corrupt Kremlin officials and oligarchs.

After taking power, Liberal commitments towards a continued, robust, values-based foreign policy towards Eastern and Central Europe and Russia wavered. A policy of re-engagement with the Putin regime was undertaken by then Minister Stéphane Dion, causing concern among allies and outright alarm among Russian human rights activists.

In March 2016, the Kremlin immediately responded to the new approach “as outlined by Minister Dion, to end Canada’s self-isolation from Russia … [as] a timely and welcome development.” During Dion’s tenure, Canada would dial back criticism and reestablish relations with the Putin regime, and the Magnitsky legislation promised by the Liberal government would be shelved.

Former US Ambassador to Russia, and architect of Obama’s failed reset with Russia, Mike McFaul, publicly expressed his disappointment with Dion’s rejection of Magnitsky legislation. As he went on to say, “do you stand for human rights or not? If this is an important value then this is something that should be done.”

As domestic and foreign criticism of the government’s foreign policy mounted, a decision was made in January 2017 to reset Canada’s foreign policy when Justin Trudeau appointed Chrystia Freeland as Minister of Foreign Affairs.

For Kremlin watchers, it came as no surprise that she was quickly and viciously attacked by Kremlin propagandists when the change was made public. Shortly after the announcement, a Moscow-based, pro-Putin conspiracy theory website with alleged links to the KGB published an article intended to smear Freeland as a Nazi apologist – a classic Soviet-era tactic that has been re-adopted by the Kremlin with renewed venom. The Kremlin’s disinformation attack was briefly amplified by Canadian media before being identified and quickly condemned as a disinformation campaign cooked up by Moscow.

Much to the chagrin of the Kremlin and other repressive, authoritarian regimes around the world, Chrystia Freeland worked with both Conservatives and the NDP in late 2017 to help Parliament unanimously pass Magnitsky human rights sanctions legislation. This legislation was introduced as a Conservative private members bill in the Senate by Raynell Andreychuk and James Bezan in the House of Commons.

Canada’s Sergei Magnitsky Law made international headlines and inspired many Canadian allies to consider adopting their own Magnitsky legislation. Expectations for Canada to take a greater international leadership role have grown ever since.

Russian opposition activist and former chess grandmaster and world champion, Garry Kasparov, told me that “thanks to Chrystia Freeland, Canada has become a great spokesperson for the free world, which is currently without a real leader.” He continued, saying that he’s “confident that Canada can continue to grow in this role and take up the leadership that’s been forfeited by the US.”

“Thanks to Chrystia Freeland, Canada has become a great spokesperson for the free world, which is currently without a real leader.”

Former Estonian President Toomas Hendrik Ilves says that Freeland “is considered one of the few foreign ministers who both knows something – indeed a lot – about foreign affairs and has the courage to take a principled stand.”

The Minister’s latest announcement, to apply Canadian Magnitsky sanctions on the 17 Saudi nationals who are suspected of murdering journalist Jamal Khashoggi in their embassy in Istanbul, was welcomed by international human rights advocates and media.

Yet there is always room for improvement. The 17 Saudis are only the third group of names to be added to Canada’s Magnitsky list since the legislation was adopted in late 2017; 52 were initially added and one was added in February 2018, bringing the total to 70. Many obvious candidates are missing from our lists, including Vladimir Yakunin, the ultra-corrupt former head of Russian Railways who continues to elude Canada’s sanctions, despite being specifically named by the Liberals in a 2015 election commitment document as someone who should be sanctioned.

Monitoring and enforcement, both of which are as important to the deterrent effect of sanctions, have not been updated, and a broader implementation strategy is still “in the works.” It should be noted that the 2018 federal budget included $22 million “for the development of sanctions policy, coordination with international partners, and providing guidance to Canadians on sanctions obligations.”

Canada must also do more to help activists, like Huseyincan Celil who has languished in Chinese prisons since 2006. An ethnic Uighur, Celil’s arrest on trumped up “terrorism” charges was racially motivated and is part of a broader repression being undertaken by the Chinese regime. The application of Magnitsky sanctions against those responsible for Celil’s incarceration would be an appropriate response and could motivate Chinese officials to finally release him.

Canada’s recent decision to rally more than a dozen other countries to sign a letter expressing concern about the mass internment of Uighurs in the Xinjiang region is a welcome first step. But more needs to be done.

Greater focus is also required on creating a national disinformation strategy ahead of the 2019 federal elections and on a permanent ongoing basis to protect Canadian democracy, our information spaces, and society from aggressive state- sponsored actors who seek to subvert them.

Canada has greatly benefitted from Chrystia Freeland’s foreign policy expertise, her positive reputation among democratic global leaders and the principled foreign policy she has developed and applied. Freeland’s leadership is also readily apparent in other aspects of Canadian foreign policy, not least the NAFTA negotiations that have preoccupied Ottawa for almost two years. On this file, Freeland led the Canadian negotiating team and proved instrumental in successfully reaching an agreement that will help ensure future stability for Canadian trade with our North American partners.

Freeland’s leadership on global issues was recognized by the globally influential Foreign Policy magazine when they named her “Diplomat of the Year.” Earlier last month, Freeland’s work on the trade deal earned her the title of “[t]he minister of being everywhere at once,” when she was named Maclean’s “Hardest Working MP.” It is with pleasure that MLI can now add our voice by naming her Policy-Maker of the Year.

With the conclusion of these trade negotiations, the Minister likely has a greater ability to make her mark on other aspects of Canadian foreign policy – and the political capital to do so. Given her record so far, that should be something that we should welcome.

Marcus Kolga is a senior fellow at the Macdonald-Laurier Institute’s Centre for Advancing Canada’s Interests Abroad. He is also a specialist on Russian disinformation and foreign policy.