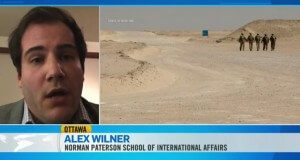 Global terrorism is still on the march. Now it’s up to Canada to decide how it wants to respond.

Alex Wilner told CTV in an interview that the deadly terrorist attacks on Paris have created a lot of momentum toward defeating ISIS.

But Canada will have to decide how it plans to fight terrorism, he says, now that the federal government is ending its participation in the bombing campaign.

“The new Trudeau government finds itself in the unenviable position of heading one way when global sentiment, after Paris and after the Sinai attacks, is heading in the other direction”, says Wilner.

Nevertheless, he says, the new government is right that there is more than one way – beyond a bombing campaign – to fight ISIS.

Wilner also spoke with Global and authored a commentary for MLI about the issue.

Tanker moratorium opens a Pandora’s box of problems for Canada: Robert Hage in the Globe

Tanker moratorium opens a Pandora’s box of problems for Canada: Robert Hage in the Globe