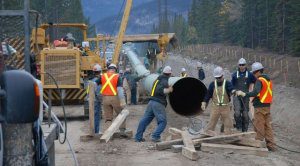 In sum, the demise of Keystone XL provides Canada the opportunity to prioritize offshore energy exports to the Indo-Pacific, writes Jeff Kucharski in the Globe and Mail.

With the cancellation of the Keystone XL pipeline by the new Biden administration, the strategic importance of the Trans Mountain pipeline project has significantly increased. The Trans Mountain expansion, or TMX, presents the best opportunity for Canada to capture world market prices for our crude oil in the Indo-Pacific while also achieving important benefits for Canada in terms of trade diversification, foreign policy and international energy security.

Antipathy to Keystone XL under the Obama as well as the new Biden administration should now make it abundantly clear that the United States is no longer the dependable market for Canadian energy it once was. Keystone XL was an easy scapegoat to satisfy the environmental lobby within the Democratic Party; the fact that Canada was not consulted in advance makes it even more frustrating.

Instead of bemoaning the cancellation of Keystone XL, however, Canada should see this as an opportunity to put more emphasis on direct access to offshore markets. Specifically, the TMX pipeline will allow Canada to take advantage of direct exports to key markets in the Indo-Pacific.

Trans Mountain Corp., the Crown corporation that operates the TMX pipeline expansion project, estimates that Canada’s oil producers will increase their revenues by $73.5-billion over 20 years. Federal and provincial governments will earn an additional $46.7-billion in taxes and royalties. Based on tax and royalty figures from the Conference Board of Canada and oil import price statistics from the Organization for Economic Co-operation and Development, a reasonable estimate for the potential value of Canadian crude sales to the Indo-Pacific is between $12-billion and $21-billion annually.

Despite the loss of the Keystone XL pipeline, it’s likely that Canadian energy companies will find a way to continue to ship crude oil to the U.S. through existing pipelines or by rail. But more crude may be redirected to offshore exports when TMX is completed in about two years’ time. While about 80 per cent of the TMX expansion capacity is already committed to existing shippers, that still leaves 20 per cent that could be used to ship more crude to market in Asia.

Importantly, more of Canada’s crude oil will then be able to fetch world market prices rather than the heavily discounted prices we now receive for our exports to the U.S. Gulf Coast. Today, U.S. buyers who re-export Canadian resources get the global prices, not Canadians. Between May and September, 2019, 16 million barrels of crude oil from Canada was exported from the U.S. Gulf Coast to buyers in China, India, South Korea and Europe.

What this means is that Canada is helping keep American refineries supplied while the U.S. becomes a major exporter to the Indo-Pacific. Not only does Canada not get global prices for its crude, it’s forgoing the strategic benefits of its own resource exports.

Unfortunately, Alberta is now on the hook for a $1.5-billion investment that was made last year. Now, all efforts to examine ways to increase shipments to both the East and West coasts must be made a priority. The federal and provincial governments should also examine ways for Indigenous investors to take a major stake in TMX when it is put up for sale by the federal government, while also attracting Asian investors and customers as potential partners.

Most Indo-Pacific countries are net energy importers and many are among the fastest growing economies in the world. From a geopolitical standpoint, Canada is well-positioned to become a supplier of choice to countries such as Japan, South Korea, China and possibly even India.

Canada has several advantages in this regard. First of all, the sea lanes between Canada’s West Coast and East Asia are uncontested, safe and secure. Canadian ports are also in closer proximity to customers in Northeast Asia than U.S. ports. As productivity in U.S. shale deposits continues to drop, Canada may gradually gain a relative advantage in crude oil exports from North America should U.S. production decline.

Canada should not miss the opportunity to forge closer trade and diplomatic relations with Indo-Pacific countries. As countries seek to have balanced trade relationships in order to reduce trade friction, the fact that Canada has trade deficits with China, Japan and South Korea means we have some diplomatic leverage that could be used to increase our energy exports. Another source of leverage is that these countries are largely dependent on oil imports from the Middle East, meaning that their energy security is dependent on stability in an unstable region. By contrast, Canada offers a stable and diversified source of oil. Canada should also work with allies such as Japan and the U.S. to address energy infrastructure, energy security, and climate change issues in the Indo-Pacific.

In sum, the demise of Keystone XL provides Canada the opportunity to prioritize offshore energy exports to the Indo-Pacific. Hydrocarbon resources will remain in demand for several more decades. For that reason, Canada should ensure that these strategic resources are used to provide economic benefits and jobs at home while diversifying trade and attracting investment to our energy industry.

Jeff Kucharski is an adjunct professor at Royal Roads University in Victoria. He is the author of the MLI report titled “Canada’s Strategic Energy Resources: Why prioritizing the Indo-Pacific will benefit Canada and our allies.”

Indigenous Prosperity at a Crossroads: An MLI Conversation with Theresa Tait-Day

Indigenous Prosperity at a Crossroads: An MLI Conversation with Theresa Tait-Day