The Trudeau government has exposed thousands of Canadians to prospective financial ruin and gross violations of privacy. 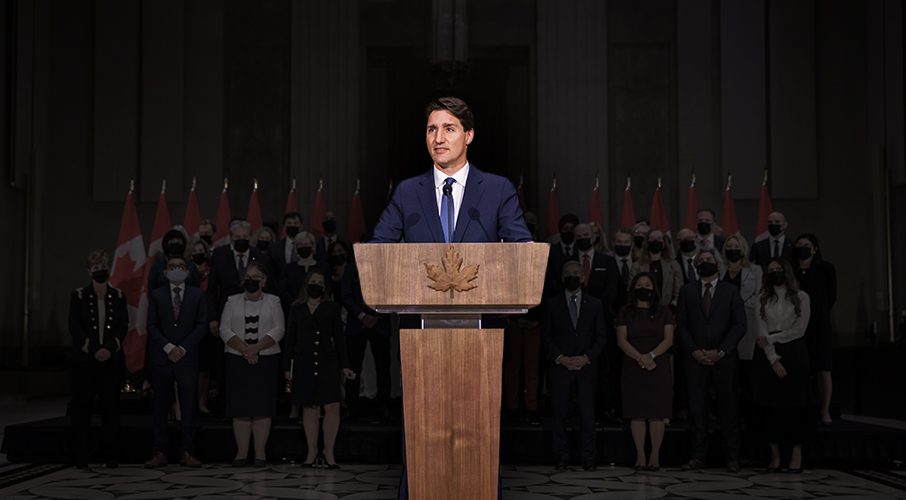 This article originally appeared in the National Review.

Canadians often gripe that the rest of the world pays little attention to our country. These days, most of us are wishing that we were making international news a lot less.

Our newfound global notoriety is a result of the Freedom Convoy, a protest movement that sprang up in late January, when fleets of trucks converged on the nation’s capital, Ottawa, to call for the end to vaccine mandates. There they remained, dug into the city’s core, for over three weeks before police began to remove them.

On February 14, Prime Minister Justin Trudeau took a drastic step by invoking the Emergencies Act, a time-limited law intended for use only in situations that seriously threaten the country’s sovereignty, security, or territorial integrity.

While this move doesn’t completely suspend civil liberties, it certainly gives the federal government significant latitude to limit many of them. Moreover, invoking the act removes many of the procedural safeguards put in place to protect other rights.

Civil-liberties groups immediately cried foul, arguing that the high threshold set out in the legislation itself had not been met, while launching court challenges against the government. Yet one measure in particular has drawn special criticism for its breadth and vagueness.

In one of the orders issued under the act, the government sought to cut off the flow of money being raised through online platforms in support of what it has now implied is an illegal protest.

The language in the order is alarmingly broad. It applies to a wide class of financial institutions with Canadian operations, including banks and fundraising platforms, even those that deal in cryptocurrencies. These institutions are required to freeze assets held by any “designated person” and report account, transaction, and identity information to the federal police and intelligence services.

It gets worse. The order defines a “designated person” as “any individual or entity that is engaged, directly or indirectly” in the Ottawa protest — or, presumably, related border protests at several border crossings, which had largely been cleared before the invocation of the act. To top it all off, the order grants financial institutions immunity from any civil liability as a result of complying with its terms.

It is hard to overstate how draconian this is. There is of course nothing unusual or improper about a government seeking to have specific assets funding specific illegal activity frozen or confiscated. But in the normal course of things, governments are required to gather intelligence and appear in court to produce evidence before a judge to secure a court order. This has the obvious purpose of preventing abuse and arbitrary action.

But under the Emergencies Act order, the government has ordered banks to freeze assets and report personal information on the vaguest of criteria: any “designated person” for whom there are “reasonable grounds to suspect” of an offense. No minimum financial threshold is outlined, meaning that individuals whose sole connection to the protest is sending, say, $50 to an online fundraiser, could be swept up in this unprecedented crackdown.

And since fundraising for the protest had raised millions of dollars before the order issued on February 14, the language of the order is ambiguous about whether the order also applies retroactively, thereby affecting those who donated to a legal protest in good faith. (As of this writing, the Trudeau government confirmed that at least 76 accounts worth $3.2 million had been frozen. By comparison, the United States froze only 50 accounts worth $6 million in the three weeks following 9/11.)

That the institutions compelled to identify these accounts on the government’s behalf are shielded from liability only makes the problem worse. It incentivizes them to err on the side of aggression, and leaves no legal recourse for, say, a John Smith from Toronto who had his accounts frozen after being mistaken for another donor with the same name.

It does not take a particularly active imagination to see the obvious problem with a government’s enlisting banks, without court oversight, to freeze the assets of protesters hostile to the government and ordering the disclosure of their information to the police and intelligence agencies, especially when the justice minister himself publicly states that donors who are “members of a pro-Trump movement” should be worried. One need not sympathize with the protesters themselves to spot the obvious and disturbing precedent set by this unjustifiable overreach. And since there is no indication that this information will be destroyed upon the expiry of the current Emergencies Act declaration, the government of the day has the potential to acquire and retain a list of hundreds — possibly thousands — of Canadians identified as “unfriendly.”

We have already had a small preview of the kind of retribution that could follow. An illegal hack — and subsequent leak — of data from one of the convoy fundraisers cost a provincial-government worker her job as a result of a $100 donation and exposed a gelato-shop owner in Ottawa to threats of bricks thrown through her store window as a result of a $250 donation she made on February 5. Troublingly, these criminal acts of vigilantism were cheered on by many of the same voices critical of the convoy, including Trudeau’s former top adviser, and those who have complained about the failure of police to uphold the law.

By invoking the Emergencies Act and casting a wide net in pursuit of a narrow goal, the Trudeau government has recklessly exposed thousands of Canadians to prospective financial ruin and gross violations of privacy. This illiberal turn is something Canadians should speak out against — even if it risks having their names put on a government list.

Aaron Wudrick is a lawyer and the director of the domestic-policy program at the Macdonald-Laurier Institute in Ottawa.