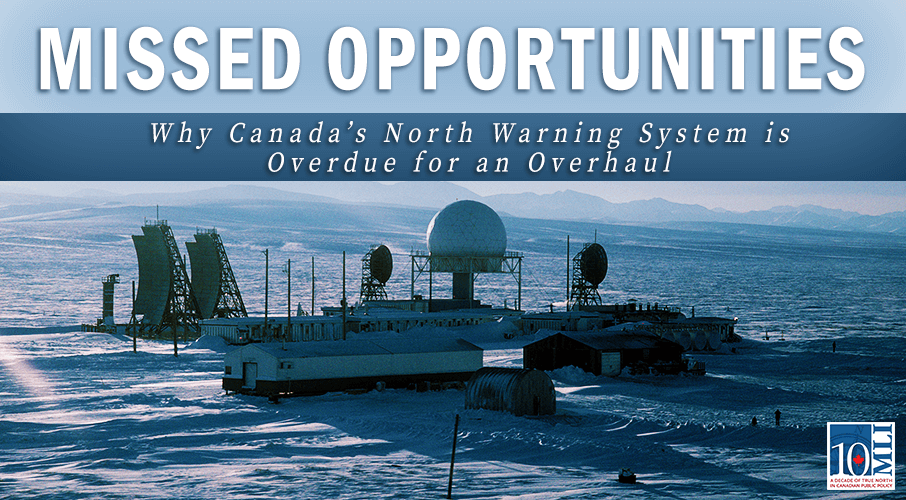 OTTAWA, ON (January 14, 2020): Regardless of the party in power, the federal government has been notorious for dropping the ball when it comes to Canada’s national defence. Good examples can be found in the government’s failures to modernize our North Warning System (NWS) and expand the scope of the North American Aerospace Defense Command (NORAD).

“The failure of the government, no different from its predecessors, to lay the groundwork for an informed debate on North American defence requirements is not surprising,” explains Fergusson. “A failure on Canada’s part to move forward relatively quickly could prove disastrous.”

The NWS plays a vital role in the defence of North America. A network of long- and short-range radars across the Canadian Arctic, the NWS plays an integral role in detecting and warning Canadian and American defence authorities about incursions from foreign aircraft and missiles. Yet the system was built in the 1980s during the Cold War and is in urgent need of modernization.

As Fergusson argues, in the intervening decades since the creation of the NWS, the threats facing Canada have changed. “Today, following the resumption in 2007 of regular Russian bomber ‘training’ flights over the Arctic Ocean to the outskirts of CADIZ, Canada faces a new threat environment… There exists a major gap in the defence of North America, and it is vitally important to move quickly to fill this gap.”

With more overt challenges from Russia and growing concerns about China, modernizing the NWS is of vital importance to the success of NORAD’s mission to detect, deter, and defend the aerospace in North America. It is also important from a broader trans-Atlantic perspective. As Fergusson writes, it is necessary to “ensure that there is no capability gap in NATO’s overall deterrence posture, which could be politically exploited by Moscow (and in the future also Beijing).”

NWS replacement also plays a major role in terms of future Canada-US military cooperation.  Seeing as the modernization of the NWS, alongside issues such as ballistic missile defence, are high priorities for the Americans while Canada continues to drag its feet, there is a risk that Canada could once again attract the ire of our most important defence ally.

Equally important is the future of NORAD’s mission. Both Canada and the United States must contend with the threat posed by sea-launched cruise missiles from both surface ships and submarines. This requires significant coordination between NORAD and Canada-US naval air defence assets, which “lays the foundation, in turn, for establishing a binational maritime command, and NORAD is the obvious choice for such a command.”

Fergusson also believes that “other existing areas of North American bilateral defence cooperation are also ripe for a NORAD solution.”

If the security and defence case for updating the NWS and NORAD’s mission is not persuasive for Canadian policy-makers, there is another risk that should be kept in mind. Fergusson notes that silence on matters of defence tends to only compound problems and confound future solutions, citing the example of Canada’s multi-decade nightmare of replacing Canada’s aging fleet of CF-18 fighter jets.

“With the public largely uninformed and disinterested, the media paying only sporadic attention… it is no wonder that the Trudeau government has remained silent,” says Fergusson. “Yet, repeatedly over time, silence backfires on government when the issue suddenly and unexpectedly explodes onto the public agenda.”

Ultimately, the issues facing Ottawa with modernizing the NWS and expanding NORAD’s mission are multi-year challenges. Unfortunately, Fergusson predicts more of the same from the federal government.

To learn more about the need to modernize the NWS and NORAD, read MLI’s latest commentary paper here.