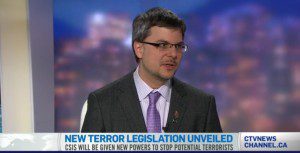 the announcement that the federal government is introducing Bill C-51, new legislation that will expand security agencies’ powers to combat terrorism.

“There’s a balance to be struck here between civil liberties and between protecting individual, public and community safety”, Leuprecht told CTV News Channel. “I think the government is trying very hard to strike a fine line and find a middle ground here”.

One of the key takeaways of Bill C-51 is that it is designed to prevent people from engaging in terrorist activities as opposed to punishing them once they have been found guilty. 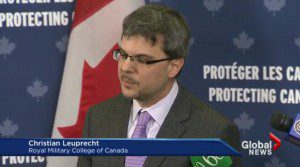 This includes expanding powers of detention – rather than arrest – and imposing conditions on people who are sympathetic to violent ideologies, Leuprecht says.

“The emphasis that we saw today is on threat diminishment activities, so not necessarily on arresting anyone and everyone, but trying to prevent efforts from happening”, Leuprecht said in a Global TV story.

“This allows them to do some pretty concrete measures”, Leuprecht told the Ottawa Citizen.

Leuprecht was also quoted in a John Ivison column in the National Post and spoke with CBC Radio One and Radio-Canada about Bill C-51.