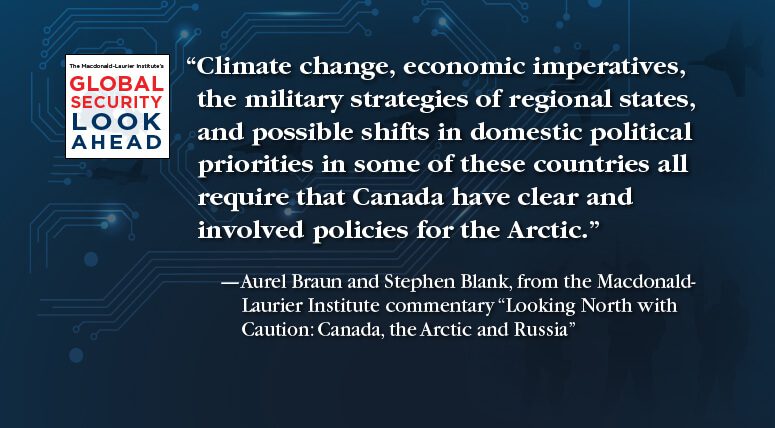 OTTAWA, Feb. 22, 2017 – Canada is competing with a number of other states for sovereignty claims in the Arctic. All of them are allies – except one: Russia.

Aurel Braun and Stephen Blank, in a new commentary for the Macdonald-Laurier Institute’s Global Security Look Ahead series, lay out the challenges for Canada as it competes with Russia for claims to Arctic territory.

“Climate change, economic imperatives, the military strategies of regional states, and possible shifts in domestic political priorities in some of these countries all require that Canada have clear and involved policies for the Arctic”, write Braun and Blank.

Braun and Blank recommend a mixture of dialogue with Russia and a greater investment in functional power.

Russia has been steadily building up its Arctic capacity while Canada has consistently failed to invest enough in key infrastructure like military bases, Arctic mobility vehicles, and heavy icebreakers.

To read all the Global Security Look Ahead commentaries, click here.

Aurel Braun is a Professor of International Relations and Political Science at the University of Toronto and an Associate of the Davis Center at Harvard University. Stephen Blank is a Senior Fellow for Russia at the American Foreign Policy Council in Washington, D.C.