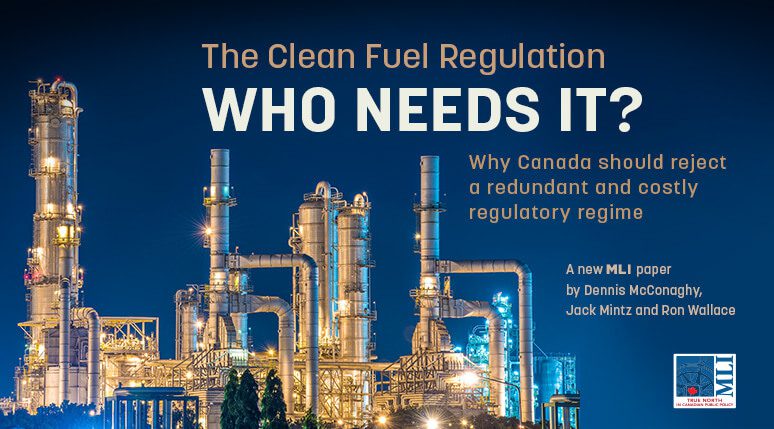 OTTAWA, ON (February 16, 2021): Last December, the federal government released a proposed draft of the Clean Fuel Regulation (CFR). However, with a federal carbon tax regime already in place and set to increase to $170 per tonne by 2030, this raises the critical question: is the CFR actually needed at all?

In MLI’s latest publication titled “The Clean Fuel Regulation: Who Needs It? Why Canada should reject a redundant and costly regulatory regime,” authors Dennis McConaghy, Jack Mintz and Ron Wallace examine whether the CFR is superfluous, given the superiority of carbon pricing to meet the goal of decarbonization. The authors argue that the CFR is a costly and unnecessary duplication of existing carbon pricing schemes.

A national carbon tax would be a far more effective economic incentive to modify behaviour and reduce greenhouse gas emissions. Such a policy would not discriminate as to the source of the emissions. Furthermore, a national carbon tax would allow the economy to react through market mechanisms with minimum bureaucratic control and other long-term regulatory constraints.

With a carbon tax already in place, implementing an additional, redundant regulatory policy would be neither efficient nor fair. And yet, the federal government has signalled its intention to do just that by continuing ahead with a truncated version of the CFR. The authors warn that such a move would be duplicative, unnecessary, and costly to Canadians.

The CFR imposes a de facto carbon price of $350/tonne for those who cannot achieve the required carbon intensity reductions compared to the $170/tonne benchmark for a carbon tax. However, there is no justification for emissions from certain liquid fuels to be taxed at a higher rate than other forms of emissions.

As a result, heating and transportation costs will undoubtedly rise for households and businesses. If anything, the government will lose fuel and carbon tax revenue with the imposition of the CFR while the primary gains will accrue to producers of biofuel and renewable energy who will benefit from the higher prices that households and businesses will pay.

“The federal government is proposing to make an enormous $20 billion economic bet based on what it calls the plausible outcome that the proposed, highly complex regulatory process of the CFR will achieve its objective,” explain McConaghy, Mintz, and Wallace.

“What is more plausible is that the CFR will materially increase costs for Canadians, result in unnecessary administrative expense, add enormously complex regulatory burdens that penalize Canadian competitiveness, and may be more costly than simply increasing the carbon tax as needed. The CFR should be entirely scrapped.”

To learn more about the Clean Fuel Regulation, click here.

Dennis McConaghy is the former Executive Vice-President of Corporate Development at TransCanada Corporation. Jack Mintz is the President’s Fellow at the University of Calgary’s School of Public Policy and Distinguished Fellow at the Macdonald-Laurier Institute. Ron Wallace is a former CEO who has served on federal, provincial and territorial energy and environmental regulators.