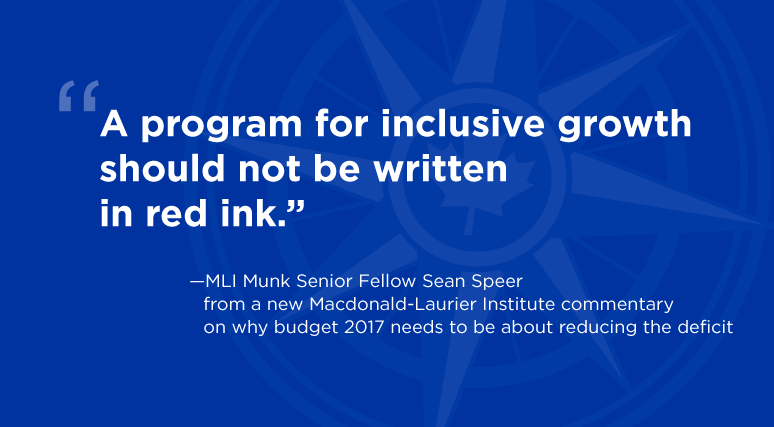 Macdonald-Laurier Institute Munk Senior Fellow Sean Speer, in a new commentary, lays out a plan for how the government can achieve its plans for inclusive growth starting with the upcoming budget.

This means following through on its promise to balance the budget.

“Just because the federal government’s public finances are relatively strong does not mean that more spending and ongoing deficits are the right plan for Canada”, writes Speer.

“A program for inclusive growth should not be written in red ink”.

To read the full commentary, titled “Sketching Out a Plan for Inclusive Growth: The Case for Less Red Ink”, click here.

The government has already rung up a nearly $30-billion deficit, and plans to reduce it are understating how difficult it will be to control spending and ultimately balance the budget.

A major concern is that only a small portion of the government’s new spending has been devoted to infrastructure investments – its stated reason for moving into deficit in the first place.

“Ottawa’s deficit is primarily the result of discretionary spending and has little to do with infrastructure investments”, writes Speer.

The government needs a plan to get back into the black – and fast.

The focus should be on modernizing the government’s operations – and reducing spending in the process. Canada Post, Health Canada, business subsidies and federal employee sick-leave benefits are specific areas in need of reform.

There are also lots of opportunities to adopt a “pro-opportunity agenda” that brings Ottawa closer to its goal of “inclusive growth”.

Why Ottawa should worry over Canada’s stagnant labour force participation rate: Sean Speer in the Globe