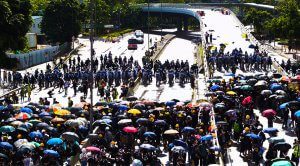 A free press is the last tie that Hongkongers have to the truth, and the truth is the engine of resistance. It must not be surrendered easily, writes Nathan Law in the Spectator.

The Apple Daily was born on 20 June 1995. Its opening editorial was a statement of intent, setting out its stall for what was to follow. ‘We belong to Hong Kong,’’ the paper wrote. ‘We are a newspaper for Hongkongers… If Hong Kong falls, we are not going to survive.’

From this bold start, few would have predicted that the newspaper could face closure just two and a half decades later. This Friday, the board of Next Digital Limited, the parent company to Apple Daily, will decide whether to close the newspaper’s operation after suffering the full force of Beijing’s financial might.

The signs are not encouraging. The paper’s owner Jimmy Lai was arrested in April for supposed collusion with foreign entities under the China-imposed national security law. Last week, five directors of Next Digital Limited were arrested and detained — including the newspaper’s editor-in-chief Ryan Law. Some 500 police officers – uniformed and civilian – raided the newspaper’s offices for the second time in recent months, with computers and archives seized as ‘evidence’. Worst of all, the company’s £1.64 million assets – HK$18 million – have been frozen, leaving it unable to pay its journalists. (Jimmy Lai’s close adviser Mark Simon has said that far more is in the firm’s locked accounts.)

Staff have applied for the restrictions to be lifted, though the government is extremely unlikely to retreat from the decision. ‘The freezing of the assets not only affects payrolls, but also normal newspaper operations,’ Apple Daily said in a statement. Banks are afraid to help out, with the paper warning on Sunday that it only has enough cash to continue normal operations for ‘several weeks.’

And for what crime has such financial pressure been brought to bear on Apple Daily? Publishing some three dozen articles that included calls for foreign sanctions on Hong Kong’s government. Under the national security law, the company is being prosecuted for colluding with a foreign country. The law is seemingly being applied retrospectively, since some of the articles are dated 2019, before the legislation came into force in 2020. The police have so far (unsurprisingly) refused to detail what articles breached the law. Authorities are reportedly currently sifting through around 100 articles looking for proof that the paper has become ‘a tool to endanger national security’ and that its journalists had ‘incited foreign countries to impose sanctions.’

It is yet another stark reminder that, some 24 years since the end of British rule, the freedom we once enjoyed in Hong Kong has been utterly eroded by Beijing’s thuggish rule.

As a former elected legislator in Hong Kong (now in exile in Britain), I have been dealing with Apple Daily for years. I know its reporters and its editors well. So it is no exaggeration to say I am heartbroken by what is happening. Their journalists are passionate and dedicated individuals, committed to holding power to account. They have never seen their job as meekly serving the regime, but as loudly pointing out the wrongdoing and misbehaviour of politicians.

When Ryan Law appeared in court under police custody a few days ago, the courtroom was packed with journalists from Apple Daily. As they watched their superiors be denied bail from the public gallery, some wept.

As one of the very few newspapers in Hong Kong with the courage to criticise the government and support the democratic movement, Apple Daily has been almost alone in fulfilling the fundamental function of the Fourth Estate and holding the government to account. Virtually all other newspapers and media outlets in Hong Kong are owned by a multitude of Chinese enterprises with political agendas. As China continues its clampdown, other remaining small and independent media companies, such as Stand News and Hong Kong Freedom, will be threatened with the same fate.

The experiences of Apple Daily reflect the efforts of the Chinese government to replicate the mainland’s media climate on the island. This was clearly shown in the 2021 Press Freedom Index, in which Hong Kong fell from 54th to 80th globally. There is further to fall: independent journalism in mainland China is non-existent, with all media outlets censored by the Party and any form of criticism banned (by comparison, China is ranked 177th in the index).

But the erosion of media freedom is just one part of the collapse of civil society in Hong Kong. The national security laws are being used to justify amendments to school curriculums; the removal of any book deemed ‘controversial’ from public libraries; and the suppression of all pro-democracy activists. With the national security law, the Chinese government has broken the promises it made to Hongkongers when the island was handed over by Britain. By centralising power in Hong Kong as it does in mainland China, Beijing has broken from the original design of ‘One Country, Two Systems’ that was agreed with Britain in the early-1980s, which sought to ensure Hong Kong would remain free, democratic and autonomous.

This development is not simply an attack on one newspaper. China’s attack on Apple Daily represents an attack on Hong Kong’s identity and character. With the news media controlled by the government, the average Hongkonger finds themselves increasingly disconnected from the country around them. Resistance to further attacks on liberties by China will become futile, as the will to fight for Hong Kong’s civil society increasingly crumbles.

Clearly the survival of an independent and fair press within Hong Kong has become unsustainable. The survival of any crumb of media freedom within Hong Kong now relies on outside intervention. Hongkongers living in exile need to produce credible news and coverage for those at home. Help from the international community is also needed — there is too much at stake in Hong Kong for the rest of the world to turn a blind eye.

A free press is the last tie that Hongkongers have to the truth, and the truth is the engine of resistance. It must not be surrendered easily.

Nathan Law is an activist in exile, is the former leader of the pro-democracy party Demosistō, and MLI’s Ambassador on Canada-Hong Kong policy.

It’s time to do better by the victims of terrorism: Sarah Teich for Inside Policy