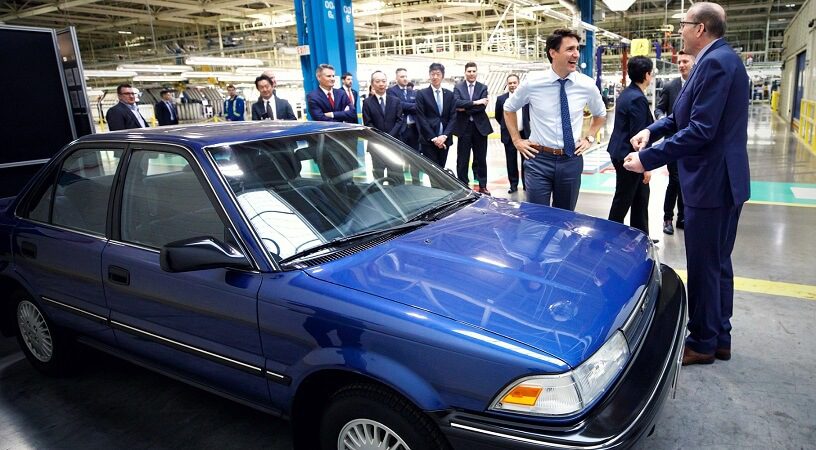 These days, the best opportunities in manufacturing and the best job prospects are for those with more education, writes Linda Nazareth.

When Toyota revealed in April that it would produce its new crossover Lexus NX vehicle in Cambridge, Ont., the news was considered so good that Prime Minister Justin Trudeau attended the announcement.

Promises to expand factories and create manufacturing jobs seem to make many feel that all is right with the economy. Some of the enthusiasm for those jobs (the federal and Ontario governments each earmarked $110-million as part of Toyota’s overall investment of $1.4-billion in its Cambridge and Woodstock, Ont., plants) compared with those in other industries, stems from the fact that the sector has done more than provide paycheques. Jobs in manufacturing have been an equalizer across the economy; a way for those without advanced education to attain a steady income and a middle-class existence.

That reality, however, has been shifting for years. And the pace of change appears to be gathering steam.

A new report from economists at Georgetown University speaks to the U.S. experience, but it is easy to extend its conclusions to Canada. Its title, Upskilling and Downsizing in American Manufacturing, says it all: Jobs in the sector are trending down over all (one reason that capturing any is such a cause for celebration), while the ones that are being added frequently require higher skills than in the past. The researchers see a revitalization for the sector, but the future they see will be increasingly inhospitable to those with only the basic skills that were once sufficient for many jobs.

To be sure, the manufacturing sector has already endured some gyrations. By the calculations of the Georgetown researchers, the sector has gone from accounting for 25 per cent of all value added in the U.S. economy in 1947 (more than any other industry) to 12 per cent in 2017, while over the same time period, professional and business services went from 3 per cent to 12 per cent, and finance went from 10 per cent to 21 per cent.

You can see a similar pattern in Canada. A 2017 paper by RBC Economics Research found that manufacturing accounted for about 10 per cent of Canadian GDP at that time, down from about 20 per cent in 2000 and 30 per cent in the early 1950s.

Not surprisingly, the manufacturing work force is also much different than it used to be. In the United States, it represented about 30 per cent of all jobs in the 1950s, a figure that had plummeted to 20 per cent by 1980 and then 9 per cent in 2016. What is perhaps hidden by the overall figures, however, is that not only have overall jobs fallen in relative terms over that period, but what the Georgetown researchers call “good” jobs have fallen as well.

It is those good jobs (defined by the Georgetown researchers as having minimum earnings of US$35,000 for workers between the ages of 25 and 44, and US$45,000 for workers 45 and older) that politicians on both sides of the border want so badly to get back. Unfortunately, the reality is that they are fighting against forces that cannot easily be defeated, even by cutting a cheque or two. Some of this is about globalization and technology and shifting production, but it is not just about getting plants back on North American soil. Even if that were to happen, the jobs created may not be the ones that had been lost.

These days, the best opportunities in manufacturing and the best job prospects are for those with more education. Good jobs for workers with bachelor’s degrees rose from 2.8 million to 3.6 million between 1991 and 2016 in the U.S., with almost all of the growth occurring outside of production and instead in occupations such as managers, business analysts, software developers and industrial engineers. Given that these are jobs that typically pay much higher salaries than the traditional “good” manufacturing jobs, arguably these are better jobs and indeed argue in favour of encouraging the sector’s development. That said, they also represent skills that tend to be in demand across a range of industries, suggesting that workers in these categories would have decent prospects of finding work whether or not manufacturing flourishes, which argues against choosing manufacturing as the source of government support as compared with other industries.

Still, whatever the encouragement, it is unlikely that either the U.S. or Canada are going to turn the clock back to a time when manufacturing was the linchpin of the economy. Even if the sector grows, it will grow by utilizing better technology and will require fewer workers. The Georgetown study figures that will mean fewer good jobs in the sector over all, although they are hopeful that those with “middle skills” and who are able to fill more demanding blue-collar skills will have the best prospects.

Supporting the manufacturing sector with public money may be a viable choice, but it is not a simple one and it will grow increasingly complex as time goes on. The sector may well create jobs, even good jobs, but it is unlikely to do anything as dramatic as eradicate income inequalities in any meaningful way. To do that will require a whole host of other investments, mostly in education.

Linda Nazareth is a senior fellow at the Macdonald-Laurier Institute. Her book,Work Is Not a Place: Our Lives and Our Organizations in the Post-Jobs Economy, is now available.