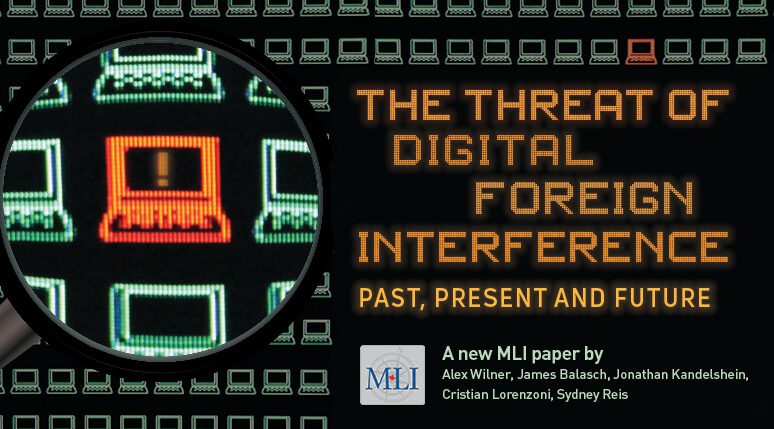 OTTAWA, ON (August 29, 2019): Hostile foreign actors are increasingly employing digital foreign interference (DFI) as part of their toolkit to undermine democratic countries like Canada and its allies. This remains a serious, ongoing threat. And, with our federal election less than two months away, Canada needs to guard against possible intrusions in its information environment and election process.

If such a threat looms large today, what does the future hold when it comes to DFI? What impact will technological advances have on the threat posed by DFI?

To help answer these questions, MLI’s latest report by Munk Senior Fellow Alex Wilner and several of his students – James Balasch, Jonathan Kandelshein, Cristian Lorenzoni, and Sydney Reis – explores how advances in Artificial Intelligence and Machine Learning could impact DFI in the future.

Titled The Threat of Digital Foreign Interference: Past, Present and Future, the report explores how DFI uses the Internet, social media platforms, and other types of technology to create and proliferate disinformation and misinformation. Once a malicious actor is virtually connected with foreign individuals and communities, they can create and disseminate tailored and targeted propaganda.

“Twitter and other social media platforms are then used to draw broader attention to the documents and data. Bots do their part to amplify the process even further. The content enters the collective mainstream, shared by regular social media users and reported upon by traditional media,” note Wilner and his co-authors.

Contemporary DFI still has an important human element, in which information is generated and disseminated by people who publish material online via social media, in much the same way as ordinary citizens might communicate their own political views to their friends and family. Yet the future of DFI will be even further AI-enhanced and AI-generated.

“Powerful automated software will troll the Internet, generating its own content and disseminating it against pre-selected and vulnerable populations. AI-supported software may eventually autonomously generate manipulative or suggestive photographs, videos, and text. A DFI campaign may even be executed and managed by an artificially intelligent software program.”

Of particular concern are deepfakes, which are video forgeries that appear to make people say or do things they never did. A good example is the famous FakeApp forgery of President Barack Obama insulting President Trump.

“With enough photo or video images of a person, facial recognition algorithms can recreate a solid replica of the person’s original face. The material can then be superimposed onto other video content. Add audio – also facilitated by AI – and you have a convincing video of a person engaged in a scenario that never took place.”

Responding effectively to DFI will require a multifaceted, multilateral, and flexible approach. Internet companies and social media firms will have to be held accountable for the information they disseminate and post on their sites. Independent tribunals might be established to review and possibly reinstate material that is removed. States may need to promote a common legal understanding of the phenomenon of disinformation and misinformation among and between the private and public sectors.

Canada should continue working with like-minded states to counter DFI when and where it occurs. As the authors conclude: “Providing a common baseline for response and collective action will help individual democracies present a unified front. Working in partnership with others, Canada might cautiously explore whether and how it might use DFI against known and identified aggressors.”

For the future, Canada should encourage the continued private sector development of domestic AI excellence in a manner that finds the right balance with privacy rights. It can also explore ways to better integrate AI expertise into Canada’s defence establishment.

To read about the future of digital foreign interference, check out MLI’s latest report here.

Hong Kong’s leaders must respond to the people’s protest: Nathan Law in the Financial Times

Hong Kong’s leaders must respond to the people’s protest: Nathan Law in the Financial Times