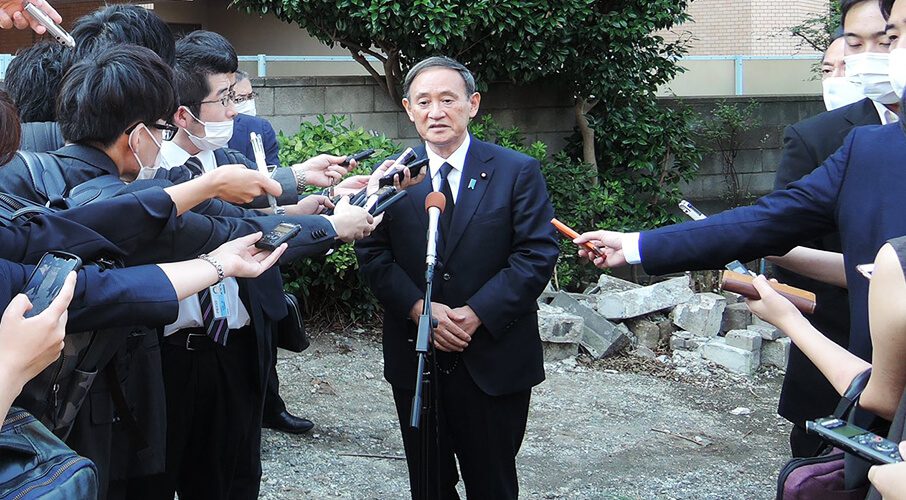 With a new captain at the helm, Japan faces daunting economic and security headwinds. But the world needs the principled, balanced and pragmatic voice of Japan in the international forum now more than ever – and it is Mr. Suga’s time to take the wheel, writes Jonathan Berkshire Miller in the Globe and Mail.

Last month, Japan’s conservative Prime Minister Shinzo Abe stunned many around the world with his resignation as the country’s leader. Mr. Abe, who has been in office since late 2012, had just recently became the longest-serving prime minister in modern Japanese history and has lent rare political stability to Japan. While Mr. Abe’s legacy will be debated over the coming months, Yoshihide Suga – who was elected by a decisive margin last week to succeed Mr. Abe as the party president of the ruling Liberal Democratic Party (LDP), and who formally became Prime Minister during an extraordinary session of Japan’s Diet – will now, more critically, need to step up and seamlessly manage the range of important challenges facing Japan.

His widely expected victory over his interparty rivals Shigeru Ishiba and Fumio Kishida – which was buoyed by the elites who control the main factional blocs that comprise the LDP – puts Mr. Suga’s government in a good position to pull off that difficult task. As Mr. Abe’s chief cabinet secretary for eight years and a long-time political confidante for his former boss, Mr. Suga has insisted that he will maintain the core of his predecessor’s signature domestic and foreign policies. And while he lacks the public profile of the two former cabinet ministers he defeated, the capable and shrewd Mr. Suga makes up for this with his stoic demeanour and the respect he’s earned across the many factions that comprise the LDP.

That will be vital. The new Prime Minister needs to signal that he can be a stable hand through the turbulent waters now being endured by his citizens.

One of his first challenges will be to deal with an economy reeling from COVID-19. While Japan’s infection rates are much lower than in many other countries, Mr. Abe’s inability to adequately manage the economic response to the pandemic was an area of key criticism. It’s an issue to which Mr. Sugo will need to pay extra attention.

The Abe administration has largely tied its success to bold “Abenomics” policies, which have worked to pull Japan’s economy out of decades of stagnancy. Despite key setbacks pushing through on structural reforms, these efforts have been successful in many ways, raising GDP growth, wages and employment. Mr. Abe was able to revamp Japan’s role in economic diplomacy, and he helped shepherd key multilateral trade agreements, including the Japan-EU Economic Partnership Agreement and the Comprehensive Agreement on the Trans-Pacific Partnership, the accord salvaged from the original Trans-Pacific Partnership and which includes 10 other countries including Canada.

On the foreign affairs side, Mr. Suga faces considerable headwinds in the region, too. Threats from North Korea and its evolving nuclear weapons and missile program need to be mitigated. Relations with South Korea have soured, and are stuck in a tailspin. And without Mr. Abe to tirelessly negotiate with Russia to resolve a territorial dispute in northern Japan, Mr. Suga must keep pressing on those fronts with the spirit of his predecessor’s pragmatic diplomacy.

However, Japan’s foremost diplomatic challenge will be managing its relationship with its ally, the United States, and its chief geostrategic rival, China. Mr. Suga will no doubt continue to position the Japan-U.S. alliance as the core of the country’s foreign and security policy, but he will need to manoeuvre carefully and with a long-term vision as the U.S. approaches a potential leadership transition after this November’s presidential election.

The same will be true as he deals with China’s growing assertiveness in the region. Rocky relations between Tokyo and Beijing have long been strained by Chinese provocations, especially its increasingly aggressive actions in the East and South China Seas. The Indo-Pacific region, in particular, faces a host of security challenges, from maritime piracy and crime to heated territorial disputes. The region relies on secure supply chain connectivity and sustainable development that is done in a transparent and equitable way, and in order to prevent any state from being able to unilaterally coerce another, Japan and other like-minded democracies, including Canada, should continue promoting an open, rules-based, and liberal Indo-Pacific that is unencumbered by the dated Bismarckian notion that might makes right.

With a new captain at the helm, Japan faces daunting economic and security headwinds. But the world needs the principled, balanced and pragmatic voice of Japan in the international forum now more than ever – and it is Mr. Suga’s time to take the wheel.

Jonathan Berkshire Miller is deputy director and senior fellow at the Macdonald-Laurier Institute. He is also senior fellow for the Japan Institute of International Affairs in Tokyo.