A veteran’s life and tragic end illustrate the stigma and struggles that follow trauma: Richard Shimooka in the Vancouver Sun 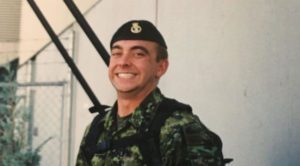 Warren was unique as an individual, however his story is not. Veterans and first responders are more likely to suffer mental illness as a consequence of their high-stress professions, writes Richard Shimooka in the Vancouver Sun.

Canada’s veterans enter into the public’s consciousness for about one week a year — the days preceding Remembrance Day. But their issues and struggles are a year-round affair and, despite their service, selflessness and sacrifice, the supports available to them are insufficient for their needs.

Warren Hillier was a firefighter in the St. Albert Fire Department, near Edmonton. To say that service to others motivated him would be an understatement — it was the focus of his life. Before firefighting, Warren was a soldier, serving with the Princess Patricia’s Canadian Light Infantry. He was deployed on a peacekeeping tour in the former Yugoslavia, and then served two tours in Afghanistan. During this time, he witnessed a number of traumatic events, including the horrific aftermath of the 2002 Tarnak Farm friendly fire incident where four Canadian Armed Forces (CAF) soldiers died and eight were wounded.

It’s cliché but true to say that most mental injuries are not visible, and usually take months or years to manifest. Warren exemplified that — for over a decade, he showed no obvious signs of distress. Quite the opposite, he seemed to thrive. Warren became a core pillar of his local fire department in St Albert. He met his partner, Michele, and they made a home and welcomed a son. To everybody who knew him, he was an unwavering pillar of strength of his community.

Warren knew, however, that the foundation that underpinned his present life could easily shift. While he was no longer part of the military, the life of a firefighter exposed him to similar high-stress events. Early on, Warren devoted a significant amount of his time to establishing a crisis network for other first responders in mental distress. Despite such efforts, he did not avail himself of this opportunity. Perhaps Warren’s dedication to serving others and his work ethic were his way to avoid dealing with his experiences. We won’t ever know.

In 2018, roughly 10 years after his retirement from the military, Warren contracted a C. difficile infection during a visit to a nursing home. The infection damaged his gastro-intestinal system, causing chronic pain. Depression soon set in, and as with many acute cases, the line between the physical and mental ailments blurred. Warren’s declining state led to a separation between him and his wife and son. While he seemed to make some tentative positive steps during the fall of this year, on Nov. 4, he decided to take his own life. Despite attempts at resuscitation, Warren passed away a few days later.

Warren’s life and tragic end illustrate the challenge of effectively dealing with this complex and pernicious issue. There is no single line that one can trace between the individuals in high-stress positions, mental illnesses that afflict them, and potential treatments. Warren clearly knew the challenges associated with depression and breaking the cycle of stigma associated with it, which makes his own end so much more tragic.

Warren was unique as an individual, however his story is not. Veterans and first responders are more likely to suffer mental illness as a consequence of their high-stress professions. A study by 2019 Veterans Affairs Canada found male veterans are 1.4 times as likely to commit suicide compared to the male Canadian general population, and female veterans are 1.9 times more likely to commit suicide than the female general population. However, the varied and often transient nature of aliments suffered by these individuals often makes crafting policies to effectively deal with all circumstances nearly impossible.

The government’s supports for veterans are surprisingly limited. Today’s veterans represent a much narrower segment of society than in past generations. Like Warren, they have served in exceptionally difficult environments and many have returned suffering a range of physical and mental ailments. The Government of Canada sends them into these situations, and therefore has the responsibility to remediate any ills they may experience as part of the covenant it makes with soldiers.

Despite this reality, there is no effective outreach program, nor a crisis hotline veterans can call when in distress. Studies in the U.S. have shown that screening veterans for mental illness and maintaining contact with them over the years can get help to individuals most in need. In the latter case, regular check-ins may enable many to feel more comfortable in expressing their problems and seeking help.

Furthermore, involving families can be a vital instrument to identifying problems early and establishing a much more effective path for treatment. In Warren’s case, he may not have been willing to express problems to others, but his family most certainly could have alerted others if the channels existed.

Importantly, the government needs to address removing the stigma around mental health issues. This starts with the CAF’s legal structure. Paragraph 98(c) of the National Defence Act states it is a service offence for a soldier to “delay the cure of disease by willful disobedience.” This creates a highly negative environment where soldiers either can be forced to undergo therapy against their wishes or hide their struggles to avoid the consequences. While only one charge has been laid in 20 years, 98(c) sets the tone for the culture around mental health in the CAF and veterans’ lives afterwards. Institutional stigma is not limited to the CAF. Many emergency occupations also stipulate any mental health issues can also be grounds for suspension. This also leads many first responders to hide their issues, which allows them to go untreated and potentially increase in severity.

Warren represented the best of what this country and its people have to offer. His selflessness and dedication to others went well beyond what anybody should expect from another human being. Canada should follow his example and provide individuals like him the support to effectively deal with their struggles and put them on the right path for the future.

Richard Shimooka is a senior fellow at the Macdonald-Laurier Institute. He is a long-time friend of Michele, the wife of Warren Hillier.

US must rethink its approach to a flexible and inclusive Indo-Pacific: Stephen Nagy in Nikkei