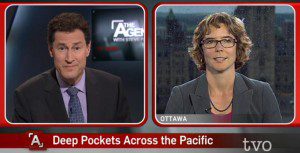 “The TPP is the most important trade agreement that nobody’s heard of”, says Dawson.

Dawson appeared on TVO’s the Agenda on May 22, 2015 to discuss the importance of the TPP for Canada.

The TPP is vital for two main reasons, she says:

MLI partnered with Dawson Strategic in 2014 for a series of events in Toronto, Vancouver, Calgary and Ottawa looking at the importance of the TPP for Canada.

Canada should embrace its natural resources: Cross on CBC’s the Exchange

Economics needs an infusion of private-sector knowledge: Cross in the Post

Economics needs an infusion of private-sector knowledge: Cross in the Post