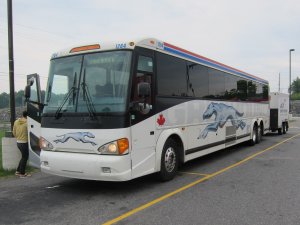 We should neither feel despair nor macabre about the cancellation of bus services in rural Canada. These communities have long demonstrated their resilience and vitality. And they will do so again. The best thing that governments can do is to get out of the way, write Sean Speer and Ken Coates.

The recent announcement that Greyhound will cancel bus services in Northern Ontario and parts of Western Canada has provoked strong reactions – ranging from despair to calls for the affected towns “to die.”

There are more options for rural Canada than a binary choice between taxpayer subsidies to restore intercity busing or moving to the city. The truth is there are whole swathes of rural Canada proving that typical rural values – self-reliance, mutual self-help, entrepreneurialism, innovation, and community spirit – can easily overcome the withdrawal of big city-style services that are actually ill-suited to the realities of rural life.

This is not mere rhetoric. New rural-based models are springing up to fill the gap and provide critical services to affected citizens.

One example is Watson Lake Shuttle & Freight in the Yukon, which is a joint venture involving a First Nations development corporation and companies operating in the territory. Another is Kasper Transportation in Thunder Bay, which is a for-profit operation that specializes in rural and remote routes in Northern Ontario and is now planning on expanding into Western Canada. And there are various others who see market opportunities in package shipping to rural communities.

Notwithstanding public support for government subsidies, the best steps that governments can take is to streamline regulations and liberalize the transportation sector. Adopting a reverse-onus model for bus licensing is one such step. Eliminating government-granted monopolies for certain routes is another. The key point is that public monies are not necessary as long as governments are not artificially driving up the cost of entering the market or sustaining operations.

A more open and flexible marketplace would enable different forms of transportation to test market conditions and the potential for profitability. Some models would fail and be discarded. Others would succeed and have the potential for scale. The exercise would be bottom-up and organic. Solutions will ultimately come from the communities and citizens that are affected.

Experimentation with different forms of rural transportation pre-dates the Greyhound announcement. The town of Innisfil, Ont., is presently saving $8-million per year using a partnership with Uber as an alternative to bus services. Enderby, B.C., is looking to build support for a similar option for rural communities in its province. And Lyft, which is just entering the Canadian market, rightly boasts that its services are available in 94 per cent of the U.S. market – including a large number of rural and remote communities.

It is a good reminder that regulatory prohibitions on ride-sharing are not just an urban issue. These policies disproportionately harm rural Canadians who already have fewer transportation options. This is part of the reason that Saskatchewan is rightly moving to permit ride-sharing in the province. Others should follow.

More generally, it is essential that policymakers think systematically about how different policies and regulations enable or impede the emergence of new transportation options for rural Canadians. Current policy barriers may not be self-evident or purposeful, but that does not make them any less onerous. The default presumption for policymakers must be to minimize such impediments. One might think of it as applying a “rural lens” to each and every policy and regulatory choice.

And we would be remiss if we did not emphasize that Indigenous communities will have a significant role to play in filling the transportation gap. The Liard First Nations chief in Yukon has described the situation a “win-win” because of the potential for revenue generation and better, more responsive services for community members. Other First Nations communities may soon follow with their own community-based solutions. It can be an example of the powerful combination of market forces and community interests producing positive results.

In sum, we should neither feel despair nor macabre about the cancellation of bus services in rural Canada. These communities have long demonstrated their resilience and vitality. And they will do so again. The best thing that governments can do is to get out of the way.

Sean Speer and Ken Coates are Munk Senior Fellows at the Macdonald-Laurier Institute.