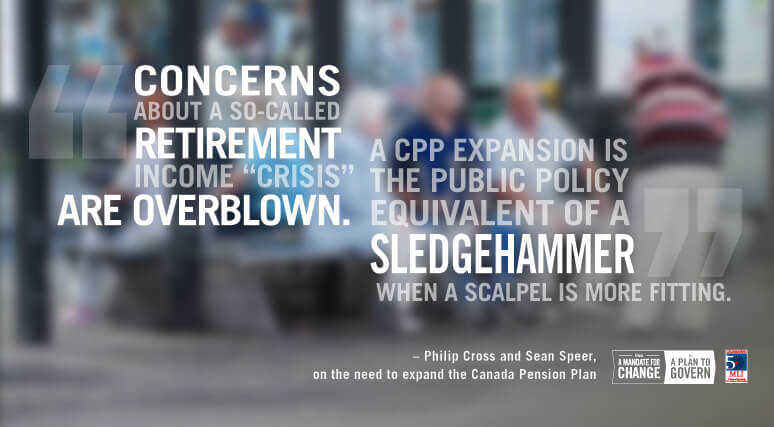 Concern over the state of Canadians’ retirement savings is overblown, authors find, and what issues there are require a ‘scalpel’, not a ‘sledgehammer’

OTTAWA, Jan. 13, 2015 – Canada’s new federal government is being urged by some provinces and stakeholders to expand mandatory savings under the Canada Pension Plan.

But does the state of Canada’s retirement income system require broad-based reform, including more forced savings?

No, says a new commentary paper from the Macdonald-Laurier Institute.

Philip Cross and Sean Speer explain why the federal government does not need to take broad-based action to help Canadians achieve a secure retirement.

“Concerns about a so-called retirement income ‘crisis’ are overblown and a CPP expansion is the public policy equivalent of a sledgehammer when a scalpel is more fitting”, write Cross and Speer.

Their new paper is the latest entry in MLI’s series titled “From A Mandate For Change To A Plan To Govern”.

The series, which is publishing weekly from the Throne Speech to the first budget next spring, is designed to offer practical policy recommendations that help the newly-elected government follow through on its election promises.

Canadians are richer than we think

The share of retirement wealth Canadians derive from government sources – such as Old Age Security or the Canada Pension Plan – is low compared to other jurisdictions.

But that, say Cross and Speer, isn’t a bad thing.

Instead, the authors show, Canadians have a high degree of retirement savings wrapped up in voluntary, non-government savings programs – instruments such as employer-provided pension plans or tax-free savings accounts – and that allows for people to tailor their retirement savings to reflect their needs and preferences.

Many Canadians also have wealth tied up in assets such as businesses or houses.

“The principal measure of the system’s effectiveness should be the extent to which it is ensuring that most Canadians have adequate resources for retirement”, they write.

“That the relative share derived from government sources is low compared to other jurisdictions is hardly an indictment”.

Different Canadians need different amounts of money for retirement. Some may want to travel extensively – and expensively — in retirement. Others are happy living a fairly low-cost lifestyle at home.

Another assumption – that Canadians will need to replace all or most of their incomes in retirement – is simply wrong. For example, say Cross and Speer, retirees won’t often need to cover costs for mortgage payments or raising children.

This makes it difficult for the government to justify large-scale intervention in Canadians’ retirement savings: Why should some Canadians be forced to save more than they will need for retirement?

“The ultimate goal should be to ensure that, overall, the system is helping most Canadians prepare for their retirement”

Even when you look at consumption patterns, Cross and Speer show, Canadians are already doing a fine job of putting away enough to enjoy their retirement.

Filling in the gaps

Are there targeted reforms that the government should consider? Absolutely.

Cross and Speer recommend the government look at topping up the Guaranteed Income Supplement for single seniors. This would help the roughly 11.5 percent of elderly people who live in households with incomes under $20,000.

Another option is to expand and reform the Pooled Registered Pension Plan model. This provides a low-cost option for those Canadians without employer-provided pension plans. These are “scalpel” solutions, though. The evidence for a “sledgehammer” expansion of the Canadian Pension Plan is flimsy.

“The ultimate goal should be to ensure that, overall, the system is helping most Canadians prepare for their retirement and not concerned with shifting a greater share to the state to meet an arbitrary target”, Cross and Speer write.

Canadians only stand to benefit from the Trans-Pacific Partnership’s e-commerce changes: Owens in the Post