in In the Media, Latest News, Releases
Reading Time: 3 mins read
A A

February 3, 2012, Ottawa, ON – The Macdonald-Laurier Institute’s Managing Director Brian Lee Crowley has just been named one of the “100 Most Influential People in Government and Politics in 2012” by The Hill Times. This is yet another accomplishment for the Institute, which in the last year won the biggest international prize for excellence in think tank publications, and was also rated as one of the top five new think tanks in the world.

“MLI was founded by a group of Canadians who believed that the absence of a true national think tank in the national capital created a great hole in this country’s democratic infrastructure,” said Dr Crowley. “We believed if we filled that hole with an organisation the applied the highest standards of intellectual rigour to the job of defining and explaining where the national interest of Canadians lies in different policy fields, we could help shape public policy for the better. This recognition from The Hill Times is thus not for me personally, but is rather for the whole team who have worked so hard to turn this dream into reality.”

In this edition, The Hill Times highlights the important role the Institute has played in becoming “an adviser to the government” and as a “stable of researchers who are called upon by the media to give commentary on national issues.” They add that the Institute has “quickly gained traction as one of the most authoritative think tanks in the country” and is also “poised to take on the role that major think tanks in Washington have already carved out in the U.S.”

Founded in 2010, the Institute has become a source of timely and thoughtful ideas that challenge conventional wisdom and shape public policy for the better. Whether in the area of refugee policy, pension reform, fiscal discipline, healthcare transfers, or crime and justice issues, to name but a few, MLI has a proven track record of bringing the very best minds to bear on real problems, and seeing our recommendations reflected in policy changes. In 2011, MLI won the Sir Antony Fisher International Memorial Award (awarded by the Atlas Economic Research Foundation) for its first book, The Canadian Century co-authored by Brian Lee Crowley, Jason Clemens and Niels Veldhuis. This past January the University of Pennsylvania rated MLI as one of the top five new think tanks worldwide.

MLI is the only non-partisan, independent national public policy think tank based in Ottawa that focuses on the full range of issues that fall under the jurisdiction of the federal government. Our funding comes from a wide range of private sector sources, including individuals, small businesses, corporations and charitable foundations. 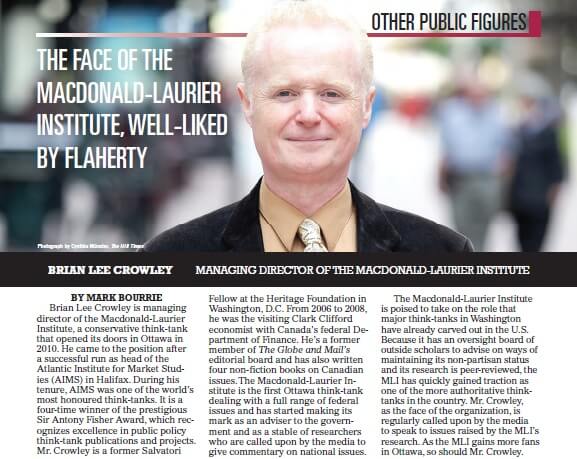