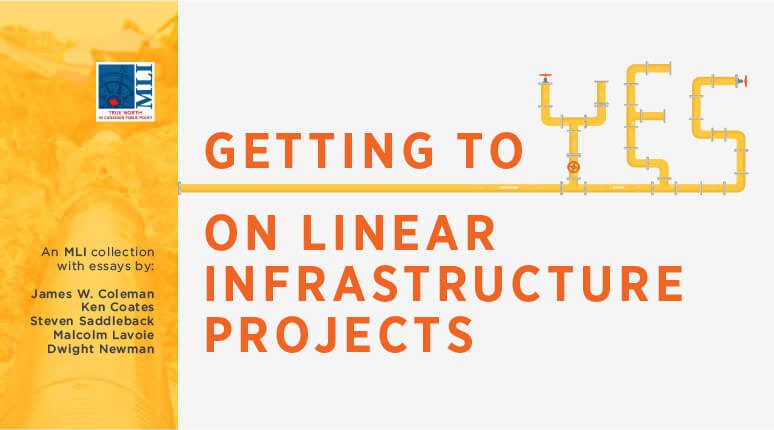 OTTAWA, ON (January 28, 2021): The Biden administration’s cancellation of the Keystone XL pipeline has brought renewed focus on the continuing troubles in Canada’s oil and gas sector and its lagging efforts at pipeline development. Indeed, there are worrying signs that other forms of linear infrastructure could prove equally difficult to complete.

MLI’s latest publication, titled “Getting to Yes on Linear Infrastructure Projects,” features a series of essays from thought leaders and experts that delve into the challenges Canada faces in linear infrastructure and offer some possible paths forward.

Chief among these challenges, and a theme throughout the essays, is the issue of “non-unanimity” among key stakeholders. For instance, the Trans Mountain Pipeline expansion, though broadly supported by the majority of Indigenous communities, is strongly opposed by a few communities and their leaders. This lack of consensus often stalls major infrastructure projects, even those with support among the most impacted communities.

These challenges also extend to a lack of consensus among government entities, too. An essay by James Coleman explores the concept of “jurisdictional anticommons,” or, the issues that arise from having competing authorities and regulators deciding the fate of a project.

These include, but are not limited to:

The same issues that have stymied pipeline development in recent years pose future challenges to electric lines for renewable power projects and, indeed, all future linear infrastructure projects. The impacts will ripple across Canada but will be felt most acutely among Indigenous communities seeking economic independence.  The authors argue that Canada needs an effective framework for linear infrastructure development that supports prosperity and ensures benefits for Indigenous and non-Indigenous Canadians alike.

“Indigenous rights and economic prosperity for all need not be at odds, but failure to exercise effective leadership may end up putting them at odds and seizing national tragedy out of national opportunity,” concludes Newman. “Canada’s future can still be one of opportunity for all, and we must all keep pursuing the steps to get there.”

To learn more about the challenges and possible solutions to linear infrastructure development, read the full publication here.

James Coleman is an Associate Professor at Southern Methodist University’s Dedman School of Law. Ken S. Coates is MLI’s Munk Senior Fellow in Aboriginal and Northern Canadian Issues. Steven Saddleback is Director of the National Energy Business Centre of Excellence (NEBCE) at the Indian Resource Council of Canada (IRC). Malcolm Lavoie is Assistant Professor at the University of Alberta’s Faculty of Law. Dwight Newman, QC, is a professor of law at the University of Saskatchewan and a Munk Senior Fellow at MLI.