Life means life should be left up to judges: Perrin on CTV

The federal government should leave the decision to deny a chance for parole after 25 years to those serving life in prison in the hands of judges, Macdonald-Laurier Institute Senior Fellow Benjamin Perrin told CTV’s Power Play on Thursday. 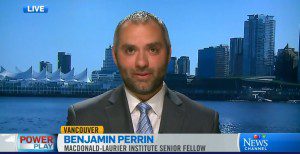 Perrin is the author of “Punishing the Most Heinous Crimes: Analysis and recommendations related to Bill C-53 (Life Means Life Act)”, which MLI released this week.

The paper argues that the federal government needs to make changes to the bill, which would mean those convicted of the most heinous murders aren’t eligible for parole after 25 years.

Perrin says that without changes the bill risks being struck down by a challenge under the Charter of Rights and Freedoms. That’s why he recommends the bill be changed so that life without parole is left up to the discretion of judges.

“It’s more likely than not that it would be struck down because it treats all offenders completely the same way and would lock them up until they die in prison,” Perrin says.

“My point is that I think some offenders deserve that, but I think judges should be the ones to make that call at the trial”.

Despite his concerns, though, Perrin says the goal of the bill is laudable.

The problem the bill seeks to correct is that, as it stands now, the Criminal Code currently treats all first-degree murders equally. Aside from those convicted of killing more than one person, people found guilty of even the most heinous of murders are eligible for parole after 25 years.

Perrin also weighs in on the string of losses the federal government has experienced at the hands of the Supreme Court, a topic he covered in detail in a November 2014 report for MLI.

He recommended the government examine more closely if it’s getting bad advice or if it’s following closely enough the advice it does receive.

Another complication is some of the confusion surrounding recent rulings.

“In many cases, though, the Supreme Court of Canada is overturning its own precedents”, he says.

“The Court has changed its mind repeatedly”, he adds.

Idle No More a different statement of Aboriginal empowerment: Coates in the Huffington Post

Canada should import health-care reform ideas from Asia: Peng and Tiessen in the Citizen

Canada should import health-care reform ideas from Asia: Peng and Tiessen in the Citizen