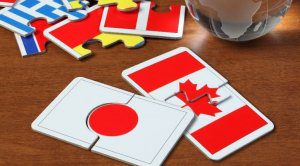 Both Japan and Canada have a vested interest in being part of how the Indo-Pacific region evolves. The conundrum for both states is how to work with like-minded states, writes Stephen Nagy in the Japan Times.

Since the Abe administration, Japan’s Free and Open Indo-Pacific (FOIP) vision continues to evolve as conditions demand but at its core it stresses the pursuit of a rules-based order in the region, including the maritime security domain. It also aims to contribute to the region’s stability through supporting its sustainable, transparent and rules-based development. It includes supporting infrastructure and connectivity, strengthening good governance and championing human rights.

These goals are consistent with Canada’s middle power identity and longstanding commitment to development making a FOIP vision with Canadian characteristics essential for engaging in the Indo-Pacific region.

Detractors of FOIP conflate Japan’s FOIP Vision with the Trump administration’s confrontational and unilateral approach to China. They argue that Japan and Canada, because of their proximate relationship with the U.S. would not be able to avoid being entrapped in a U.S.-led containment strategy under the umbrella of an Indo-Pacific Strategy. They also suggest that the FOIP vision is merely a de facto alliance of U.S. allies and partners including Australia, Japan and India to stem China’s rise.

This argument is problematic at several levels. First, it willfully dismisses the reality that the largest trading partner of allies of the U.S. in the Indo-Pacific is China. An anti-China coalition is just not feasible or desirable. This is evidenced in Japan, Australia, South Korea and Southeast Asian states signing in November 2020 the Chinese-led Regional Comprehensive Economic Partnership (RCEP). Simply, they do not want or have a zero-sum view of their relationship with Beijing.

Second, the suggestion that Japan, Canada and other like-minded states cannot say no to the U.S. is not borne out in fact. Despite former President Trump’s insistence that Japan sign a free trade agreement with the U.S. or succumb to its exorbitant demands to increase Japan’s contributions to the alliance relationship, Japan said no. The same is with the Canadians, French and Germans saying no to the second Gulf War, and the Japanese and Canadians spearheading multilateral trade agreements such as the CPTPP as a successor to the TPP.

Third, these views assume that a Biden administration would take the same approach to the region as the Trump administration. The latter was inexperienced in foreign policy, did not value alliances, international norms or expertise. The former on the other hand has a long track record of support for multilateralism, alliances and expertise.

This is reflected in his recent speech at the Munich Security Dialogue in which he stressed, “The trans-Atlantic alliance is a strong foundation — the strong foundation — on which our collective security and our shared prosperity are built. The partnership between Europe and the United States, in my view, is and must remain the cornerstone of all that we hope to accomplish in the 21st century, just as we did in the 20th century.”

Biden’s calls to Japanese Prime Minister Suga, Australian Prime Minister Morrison and South Korean President Moon giving assurances that their alliances and each respective partners’ security concerns are a US priority, the return to the Paris Climate Accord and WHO and even an offer to return to the Iran nuclear deal demonstrate leadership does matter when it comes to foreign policy tone and practice.

Lastly, it plays directly into how China’s narrative about what alliances are about, the purpose of multilateralism and why states want to formulate their strategic engagement in the Indo-Pacific. It is not about containment but about building new institutions that are needed to deal with 21st century challenges that will increasingly be centred in the Indo-Pacific region. FOIP advocates need to ensure they are telling their own story and not fall into CCP narratives that stoke Chinese nationalism and concerns about another century of humiliation.

Why the Indo-Pacific region

The Indo-Pacific’s transformation into the center of global economic growth has occurred without the development of robust, rules-based institutions. Critically, it is home to consequential traditional and non-traditional security challenges that threaten the region’s resilience, prosperity and stability. Without proactive multilateral engagement, the region’s stability and prosperity could be easily derailed. A consequence that would have negative repercussions at the global level.

Climate change and the dearth in infrastructure and connectivity are immediate challenges that require multilateral, sustained engagement. Traditional security challenges such as the proliferation of weapons of mass destruction, states that eschew international law as we saw in July 2016 with China rejecting all the Permanent Court of Arbitration’s decisions on its claims in the South China Sea (SCS) and regular, illegal incursions into the contiguous zone or intrusions into the territorial sea surrounding the Senkaku Islands in the East China Sea (ECS) challenge the post-World War II order.

Aside from maritime challenges to a rules-based order in the SCS and ECS, the region has also witnessed a coup in Myanmar, the calcification of military rule in Thailand, an authoritarian tilt in the Philippines and Hindu nationalism resulting in intra-religious strife in India between the Hindu majority and Muslim minority.

It goes without saying that the COVID-19 pandemic has demonstrated the fragility of the Indo-Pacific region in terms of the needs of development, infrastructure and connectivity and good governance such that they can become more resilient, stable and prosperous

Instability, arrested development and a region that is characterized by a “might-is-right,” Machiavellian set of rules is not in Japanese or Canadian interests, nor of our friends in the region. It would make trade engagement less predictable; it could lead to the balkanization of trade, technology, and the digital economy making it more difficult to seize the economic opportunities that exist in the region.

Erosion of a rules-based order in the Indo-Pacific would also make it more difficult to deal with regional challenges such as climate change, development, militarization of the region, among others. All of which have the potential to cascade into unprecedented humanitarian and economic crises that would not remain in the region.

Advocating for a “free” and “open” Indo-Pacific region does not mean not supporting diversity or being exclusive as some have argued. Quite the contrary, the free and open pillars of Japan’s FOIP vision and a likely Canadian vision are consistent with Japan and Canada’s middle power identity, longstanding commitment to development and support for a rules-based order that strengthens and supports their national interests and the interests of our friends and allies. These are mutually beneficial and reinforcing.

Arguably, a “free” and “open”, inclusive and rules-based approach to the Indo-Pacific that encompasses trade, infrastructure and connectivity, the management of sea lanes of communication in the SCS and ECS, pandemic warning and coordinated responses, climate change mitigation among other issues facing the region would inculcate more stability, not less into the region.

Both Japan and Canada have a vested interest in being part of how the Indo-Pacific region evolves. The conundrum for both states is how to work with like-minded states in the Indo-Pacific to build a rules-based, inclusive order that robustly defends and protects democracy and human rights, contributes to resilience, prosperity and stability, while balancing the opportunities and challenges of an increasing authoritarian China under Xi Jinping.

Stephen Nagy is a professor at the International Christian University in Japan and fellow with the Canadian Global Affairs Institute.