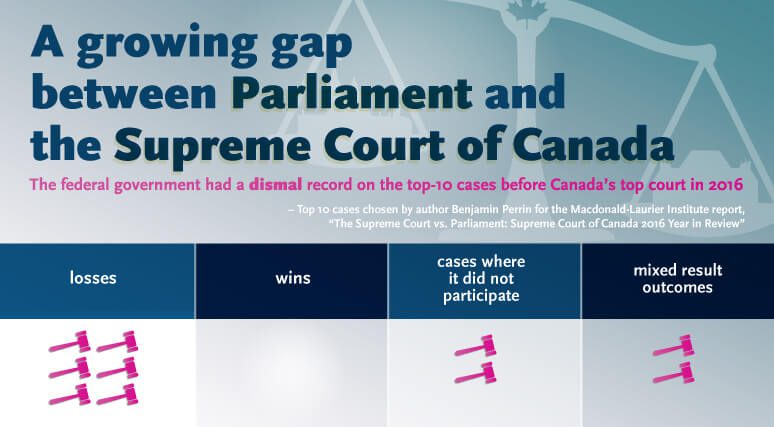 OTTAWA, Dec. 8, 2016 – A chorus of dissent is booming at the Supreme Court as increasingly vocal justices declare their opposition to their colleagues’ intrusion into Parliament’s policy-making role, the Macdonald-Laurier Institute’s 2016 review of the Court finds.

The Supreme Court vs. Parliament emerged as the top theme of this third annual review of the Supreme Court of Canada’s major decisions. In a series of dissenting and concurring reasons, five of the nine judges on the Court voiced harsh criticism at various times of the majority judges for inappropriately intruding on Parliament’s policy-making role.

This is a serious critique that goes to heart of the relative responsibilities of the Court versus Parliament.

“The Supreme Court of Canada is a trailblazing institution in Canadian public life that continues to move significant and controversial issues forward”, writes Perrin.

The report, the third annual study Benjamin Perrin has conducted for MLI, examines the legal significance and policy impact of the Supreme Court of Canada’s top-10 decisions from the last year (November 1, 2015 to October 31, 2016). These cases were selected based on the importance of their subject matter and broad significance to Canadians. 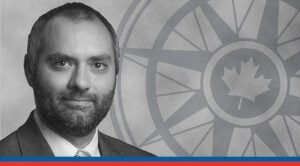 In addition to finding increased dissent among colleagues on the court, Perrin makes two other main conclusions.

First, of the top-10 decisions in the last year, the federal government had zero wins, six losses, two mixed result outcomes, and two cases where it did not participate.

Secondly, major criminal justice reforms have been initiated by the Court to deal with significant concerns about delays and inefficiencies.

Perrin says the annual Supreme Court reviews raise several issues Canadians should be watching, including another poor win record for the federal government.

“It is remarkable to observe the dismal record of the federal government at the Court in major litigation in recent years: a mere three clear victories in the top-30 cases between 2014 and 2016 is a staggeringly poor result”, writes Perrin.

Perrin calls for a thorough internal review by the Department of Justice into the efficacy of government litigation.

Another is a shift in philosophical outlook brought about partly by the appointments of former prime minister Stephen Harper.

Many of these justices are now vocally reflecting an approach of judicial restraint, recognizing that while the Court has a duty to review governmental action and legislation, it must also respect the policy-making role of Parliament.

Benjamin Perrin is an Associate Professor at the University of British Columbia, Peter A. Allard School of Law and a Munk Senior Fellow at the Macdonald-Laurier Institute for Public Policy. He previously served as Special Adviser, Legal Affairs & Policy in the Office of the Prime Minister and was a Law Clerk at the Supreme Court of Canada. Professor Perrin is a member of the Law Society of British Columbia.

Expanding the Working Income Tax Benefit should appeal to all parties: Sean Speer and Rob Gillezeau in Policy Options

Give regulators final say on pipelines, Crowley urges in the Financial Post

Give regulators final say on pipelines, Crowley urges in the Financial Post