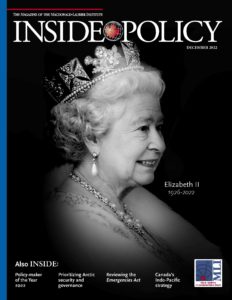 On September 8, 2022, Canada lost its longest-reigning Sovereign and Head of State, Queen Elizabeth II. Her Majesty’s unparalleled long reign covered nearly half of Canada’s post-Confederation history. Her passing presents a unique moment of reflection for Canadians, not only the life of dedicated service which Her Majesty led, but also upon the broader contributions of the monarchy and Crown to Canada’s political tradition and institutions.

To lead our cover feature, Patrice Dutil reflects on the life of Queen Elizabeth II. As he notes, “She never said Canada was perfect, but more than any prime minister or governor general, she was a faithful witness to the development of the country, trusting the hand of steady progress, and reassuring those who listened.”

As well, Frank Buckley offers his personal thoughts on the passing of Queen Elizabeth II, noting the value of parliamentary governments compared to presidential ones. This is followed by Ken Coates and Melissa Mbarki, who explore what the Queen’s passing means for the future of Indigenous-Crown relations, and Andrew Irvine, who looks back at the Queen’s reign and the role of the Crown.

We are also pleased to showcase our Policy-Makers of the Year for 2022. This year, we have selected two individuals to share the spotlight: Ukrainian President Volodymyr Zelenskyy on one hand, and Russian President Vladimir Putin on the other. The former is an inspiring and respected wartime leader who has galvanized not only his country but much of the democratic world behind him, while the latter is a dictator whose illegal and brutal invasion of Ukraine harkens back to the dark days of the Second World War.

“The invader refuses to halt his brutal aggression, while the defender refuses to abandon his nation to re-colonization,” notes Adam Zivo. Yet, as he goes on to say, the war in Ukraine underlined the Canadian government’s reluctance to show leadership on the world stage.

In addition, Stephen Van Dine looks at the governance challenges facing Canada’s Arctic, which faces pressures both domestically and internationally, and Heather Exner-Pirot and Evan Bloom examine the role of the Arctic Council in the aftermath of Russia’s invasion.

Also in this issue, Coates turns to the question of Indigenous involvement in the Maritime fishery sector, Bruce Pardy questions the value of the Public Order Emergency Commission reviewing the use of the Emergencies Act, Richard Shimooka explores Ukrainian perseverance against Russian brutality, and Charles Burton offers a more critical take on Canada’s much belated Indo-Pacific strategy.

This being the last issue of the year, Merry Christmas and happy holidays from MLI!

Inside Policy is published four times per year in a print edition for a guaranteed circulation of Canadian policy makers and business leaders. An online edition of Inside Policy is available without charge. Back issues can be found here.