WHO you gonna call? Why there’s something strange about international institutions: New MLI report 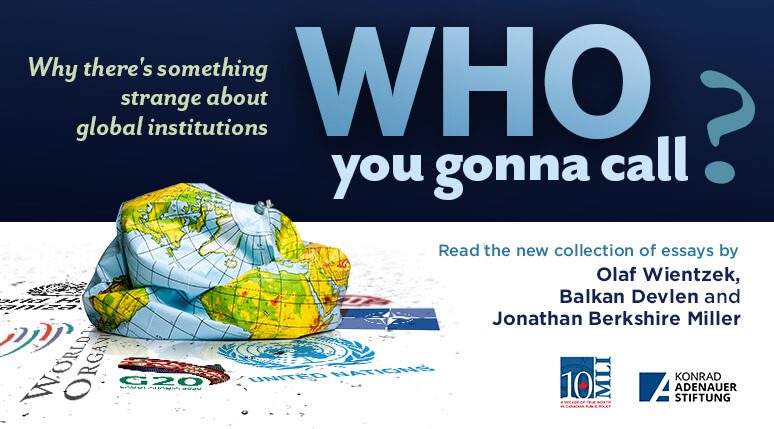 OTTAWA, ON (December 23, 2020): The World Health Organization’s initial refusal to alert the world to the true danger of the pandemic, due to its deference to China, is a symptom of a wide-ranging failure by the UN and other organizations to reject the influence of regimes that seek to undermine Western values

In MLI’s latest report, “WHO you gonna call? Why there’s something strange about international institutions,” three distinguished experts offer their thoughts on the failure of global institutions to defend security, health, freedom and prosperity in the world, and how Canada and its allies should reform existing institutions and/or adopt new and more effective ones.

“In this already difficult context for multilateralism, the COVID-19 crisis has highlighted two somewhat paradoxical trends,” explains Wientzek. “On the one hand, it has shown the faults and limitations of several multilateral bodies, on the other hand the crisis has underlined their enormous (potential) importance.”

According to Wientzek, global institutions like the WHO have largely been restricted by their member states in terms of how they can respond to problems like the COVID-19 pandemic. He notes that this is most clear with China’s actions to restrict WHO access and block Taiwan’s participation.

However, Wientzek highlights the need for greater Western involvement to solve these problems, not less. The Western retrenchment on the global stage, led by the US, has created a power vacuum that countries like China have readily exploited, thereby further eroding international institutions.

The second essay, titled “Expanding the toolkit: How minilateralism can help fill the void left by failing international institutions,” breaks down the challenges facing multilateralism in the world today. As authors Balkan Devlen and Jonathan Berkshire Miller note, “The current global multilateral institutions are no longer sufficient in protecting the interests of liberal democratic states, such as Canada.”

Among the key challenges that they identify include subversion by authoritarian actors like Russia and China, an inward-facing superpower in the United States, a general dysfunction among institutions that the COVID-19 pandemic has only accelerated, and lastly, a growing emphasis – especially by countries like Canada – on multilateralism as an end of itself.

As part of an overall rethink on multilateralism, Devlen and Miller recommend a layered and nuanced approach to international institutions – one that embraces a more targeted and focused form of minilateralism.

“A minilateralist approach argues that we should focus on developing a more limited set of international organizations that are not universal in their membership,” write Devlen and Miller. “[W]e have to focus our attention and energies to working with like-minded states and allies, rather than trying to accommodate and engage those states that do not share our values or interests.”

Both essays were first published as individual commentaries. But, for ease of reference, we have collected them here in this report. The Macdonald-Laurier Institute would also like to thank its partner in this project, the Konrad Adenauer Foundation, for their generous support.

Olaf Wientzek has been the director of the Geneva Office of the Konrad-Adenauer Stiftung (KAS) since May 2019. His office closely follows the work of the various Geneva-based multilateral organizations.