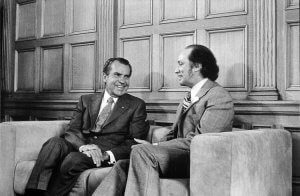 Pierre Trudeau’s ghost must sleep uneasily this Christmas as his son toys with a reset of official bilingualism, writes William Watson in the Financial Post. Below is an excerpt from the article which can be read in full here.

Fathers have to deal with sons, and sons with fathers. Such is life since a couple of globs in the primordial goop invented sexual reproduction. Justin Trudeau is into his second government and sixth year in power. We can now begin to compare father and son, each born to wealth, each seen as a dilettante until entering Parliament, at 46 in the case of the father, 37 for the son.

Pierre Trudeau showed little angst about adding to it. He balanced the federal budget just once in his 15+ years in office, in 1969-70. His last full year, 1983-84, the deficit was 7.7 per cent of GDP. It peaked at 8.0 per cent the following year and then the Mulroney Tories began the long, hard slog of bringing it down.

In the 2015-16 fiscal year, when Justin Trudeau took over, the debt was back down to 31.9 per cent of GDP. After little ups and downs, by 2019-20 it was 31.3 per cent. Forecasting is perilous but no one will be surprised if it jumps 20 points this fiscal year. As for deficits, the younger Trudeau inherited a budget a half billion dollars from balance and by 2019-20 had it in the red by 1.7 per cent of GDP, despite a good economy with low unemployment. That’s not actually bad for a Trudeau. Over the final 10 years of his father’s governments, only once was the federal deficit less than 1.7 per cent of GDP. In the current fiscal year, of course, all deficit bets are off, except for the good possibility this year’s will exceed last year’s total spending, breaking all-time records, peacetime and wartime.

The Decline of Canada’s Defence Aviation industry: Richard Shimooka in the Hill Times

When will the United Nations wake up to China’s human rights nightmare? Dean Baxendale for Inside Policy

When will the United Nations wake up to China’s human rights nightmare? Dean Baxendale for Inside Policy