in Latest News, Past Events
Reading Time: 2 mins read
A A

The Macdonald-Laurier Institute invites you to join us on the centenary of a momentous election:

CANADA 1911
The Decisive Election that Shaped the Country

What: The evening will feature a brief talk from the authors on the key themes of the book followed by a short panel discussion comparing the issues of 1911 to where Canada is today. Panellists will include noted historian Jack Granatstein and political strategist Derek Burney.

There is no charge for this event however pre-registration is strongly recommended.

The book will be available for purchase for $25.00 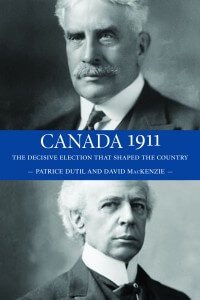 Exactly one hundred years ago on September 21st, Canadians went to the polls to decide the fate of their country in an election that raised issues vital to Canada’s national independence and its place in the world. The election turned on such issues as free trade with the United States, the involvement of the business community in politics, and important military policy. The decisions made in the September 1911 election helped shape Canada’s political and economic history for the rest of the century. It was Canada’s first great modern election and one of the first expressions of the birth of modern Canada.