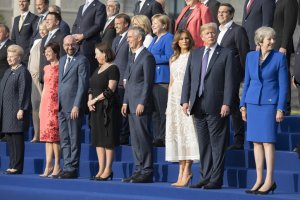 Canada needs to work with its allies and partners to support the still influential pro-transatlantic community within the United States, write Joel Sokolsky and Christian Leuprecht.

As extraordinarily disruptive as the Trump Presidency may seem, his approach to foreign policy, and the reaction it conjures up, is not entirely unlike earlier periods of controversy and acrimonious debate over America’s role in the world. But it brings to the fore strands of foreign policy that have not been prominent since the domestic debate over America’s entry into World War II was settled.  Their resurgence could well herald a significant realignment in US foreign policy, one that has been looming since the end of the Cold War, with momentous implications for allies such as Canada.

In his recent book, The Soul of America: The Battle for Our Better Angels, celebrated American historian Jon Meacham reflects on other periods during which Americans battled amongst themselves over the true character of the American soul: the post Civil War reconstruction era, the 1930s Great Depression, the debate over entering World War II, McCarthyism and the civil rights struggles of the 1960s. In each case, Meacham argues, the US has “endured moments of madness and of injustice.”  Although the United States has witnessed “periods of public dispiritedness” and vulnerability to “fear, bitterness and strife,” Meacham reminds us that the Republic and its founding values have endured, with Lincoln’s “better angels” of the American nature ultimately prevailing.[1]

During the NATO summit in Brussels earlier this summer, a renewed struggle for the future of American foreign and defence policy was on full display. Caught in middle is Canada and the future of its role and commitment to the Atlantic Alliance.

Since the late 1940s, from the ups and downs of the Cold War right up to Canada’s recent re-commitment to the “enhanced Forward Presence” (eFP) mission in Latvia, Canadian defence policy has been shaped by the US-led multilateral, liberal-democratic Western internationalist security order. This was especially the case in Europe through NATO and in North America through a wide array of bilateral defence and security linkages and the ‘binational’ North American Aerospace Defence Command (NORAD).

Any suggestion that this order might be coming to an end calls into question Canada’s entire defence posture. Ergo, Canada has a real stake in the current American public discourse on US defence policy.

Before the Brussels summit, President Trump had sent a letter to Prime Minister Trudeau in which he castigated Canada for underspending on defence. US demands for Canada to spend more on defence are hardly new: Mr. Trudeau’s close friend Barack Obama made the same demand, as had his predecessors. Mr. Trump is probably oblivious to the “fully costed” spending projections in the 2017 Canadian defence policy statement, Strong, Secure, Engaged.  If he were, it would only add fuel to his ire: Canadian defence spending, as a percentage of Gross Domestic Product (GDP), is projected to rise from the present 1.1 percent to 1.4 percent by 2024/25 – a long way and two federal elections off, and even then still being well below NATO’s aspirational target of 2 percent of GDP.

But the Prime Minister stuck to his policy guns, claiming that what counted was not some arbitrary, inconsistently applied measure of the portion of national wealth devoted to defence spending, but capacity, capability and commitments to NATO’s collective defence posture. Accordingly, Mr. Trudeau announced a multi-year extension and modest increase of Canada’s nearly 500-person commitment to the allied eFP mission in Latvia, which Ottawa leads as the “Framework” Nation. Trudeau also announced a new commitment to lead NATO’s training mission in Iraq.

However, such commitments by Canada and other alleged laggards are unlikely to satisfy Mr. Trump. His public scolding, and the unconventional take on NATO it reflects, is not about specific quantitative measures of allied burden sharing, but rather the fundamental US strategic commitment to Europe.

In the past, as MIT’s Barry Posen recently observed, “Alliance partners on both sides of the Atlantic” have found “complaints about burden sharing irksome not only because they ring true but also because they secretly find them unimportant.” As he further explained, “The actual production of combat power pales in comparison to the political goal of gluing the United States to Europe no matter what.”  How much Canada spends on its military will be irrelevant if this glue comes undone, because the very foundation of Canadian defence policy would unravel.

To play down this clear and present danger as a momentary lapse in US reason would be an exercise in historical amnesia. For however tempting it might be to chalk it all up to the crude and uniformed idiosyncrasies of a misguided President, the provenance of the Trump approach is well established in certain American foreign policy traditions, especially those that held sway prior to 1945.

To play down this clear and present danger as a momentary lapse in US reason would be an exercise in historical amnesia.

Famed historian Walter McDougall points out that the bedrock American foreign policy tradition is not isolationism but unilateralism, avoiding foreign entanglements that did not serve US interests. In the early 20th century, and especially with the advent of the Cold War, America did not so much abandon unilateralism as it came to see its own national interests as requiring US leadership of a liberal international order, as well as entangling bilateral and multilateral security ties, with NATO as its centrepiece.

A possible American retreat from this demanding internationalism has been looming since the end of the Cold War.  Initially it was delayed by Democrats who embraced President Bill Clinton’s support for globalism through engagement and enlargement of liberal-capitalist democracies, and Republican and neo-conservative aspirations of preserving US primacy and prolonging the “unipolar moment.”

Then came 9/11 and the US-led “Global War on Terror,” which deepened and broadened America’s global entanglements.  President Obama’s attempt at reining in this latter expansionism earned him stinging rebuke from the right for retreating from global leadership.  Although Trump has declared all things Obama as un-American, ironically these deeply rooted American tendencies toward a less activist global role that surfaced briefly at the end of the Cold War are now at the core of Trump’s movement to “make America great again.”

In doing so he is compelling the United States to confront the meaning, purpose and, indeed, the very soul of American foreign and defence policy in terms of the country’s interests, identity and values.

On one side stands the old (Democratic and Republican) foreign policy elite.  Their position is captured by Congress’s bipartisan pre-summit reaffirmation of support for NATO.

On the other side, confronting “the Swamp” – as Trump likes to call the Washington establishment – are not only the narrow grass-roots nationalists of Trump’s base, but also those who argue that American global leadership may have served US interests in the past, but this is no longer necessary to assure American security and prosperity.

Harvard’s Graham Allison recently wrote: Trump’s rhetoric has exposed the “myth of the liberal order” in its economic and military dimensions. Created and sustained during its Cold War heyday, American leadership was not primarily about creating a new international order per se, but instead about containing and deterring global Soviet expansionism – a relic long extinct.

“Rather than seek to return to an imagined past in which the United States molded the world in its image,” Allison argues, “Washington should limit its efforts to ensuring sufficient order abroad to allow it to concentrate on reconstructing a viable liberal democracy at home.”

Trump’s rhetoric has exposed the “myth of the liberal order” in its economic and military dimensions.

What can Ottawa do? The reality is that foreign governments and public opinion will have little sway over the outcome of this debate.  Americans will, as they have always done, resolve these matters amongst themselves.

At the same time, Canada can work with other allies such as Germany, France and the UK, as well as newer NATO members, to support the still influential pro-transatlantic community within the United States, including both Democrats and Republicans in Congress and indeed amongst some senior officials within the Trump administration.  The recently-passed US  defence budget included major new funding to support American forces and NATO. And it is now known that the President’s senior advisors, led by National Security Advisor John Bolton, obtained allied consensus on the Brussel Summit communiqué, which included agreement on several key NATO initiatives prior to the contentious July meeting.

Notwithstanding the President’s bluster and questionable behaviour, the hope that America will once again embrace the “better angels” of its foreign policy nature remains. Ottawa has already indicated that Canada will not be assuming a greater financial and material share of the allied burden any time soon. But the Canadian government can, within constrained fiscal limits, fulfill the limited procurement commitments it has made within the promised timeframe. It can also optimize the way it allocates scarce resources in support of NATO’s diverse and essential security initiatives, as it is doing in Latvia and Iraq.

As with Canada’s outsized contributions to Afghanistan, putting troops on ground, in whatever numbers, is noticed in Washington where it counts: at the Pentagon and in Congress.  Contrary to what happened too often in the past, Canada must also hold firm to commitments to capabilities, capacities, and timelines on new equipment it has already promised to procure.

Precisely because of its own profound stake in and commitment to the “old order” of American global security leadership, with NATO at its centre, Canada unwittingly finds itself caught up the debate that Americans are waging over the “soul” of US foreign and defence policy.  If that struggle culminates in America disengaging from the venerable Atlantic Alliance, then Canadians, along with other US allies old and new, will be left picking up the pieces.

For once, Canadians will be compelled to debate the meaning of their own foreign and defence policy. That would engender a struggle for Canada’s own foreign policy soul such as the country has not had to endure in three quarters of the century.

Joel Sokolsky is a Professor at the Royal Military College of Canada. He is a Senior Fellow at the Queen’s University Centre for International and Defence Policy, a Research Affiliate at the Strategic Studies Program of the Massachusetts Institute of Technology and a Senior Analyst with Wikistrat.com.

Christian Leuprecht is Class of 1965 Professor in Leadership at the Royal Military College of Canada, cross-appointed to Queen’s University, Matthew Flinders Fellow at Flinders University, and Munk Senior Fellow at the Macdonald-Laurier Institute.

They recently co-edited (with Thomas Hughes) North American Strategic Defence in the 21st Century (Springer, 2018) and co-authored (with Jayson Derow) On the Baltic Watch: The Past, Present and Future of Canada’s Commitment to NATO’s Enhanced Forward Presence in Latvia (Macdonald-Laurier Institute, 2018).

Let's aim for local over centralized, on health care and more: Sean Speer in the Toronto Sun