How Canada can start to fix its money laundering problem: New MLI study by Christian Leuprecht 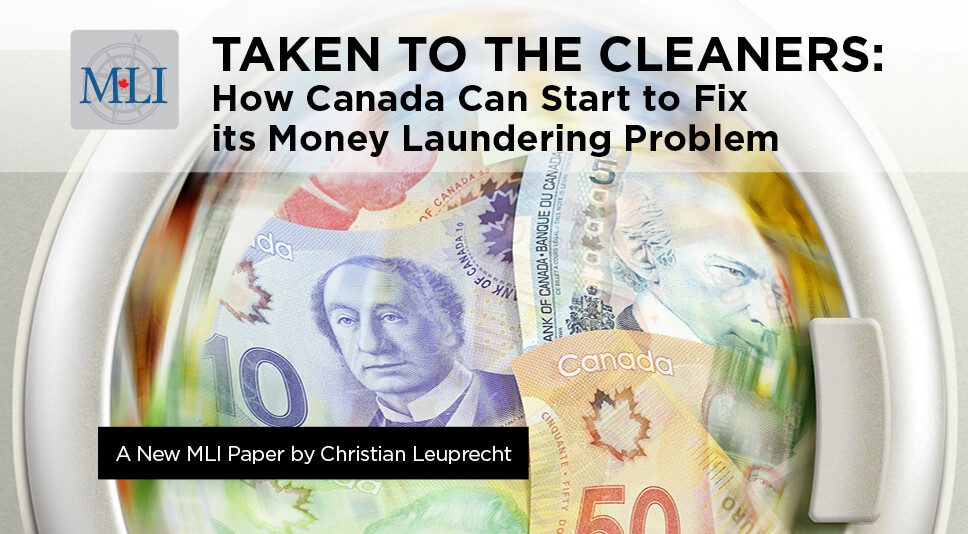 OTTAWA, ON (December 19, 2019): Money laundering is finally being acknowledged as a serious and growing problem in Canada. And policy-makers are also beginning to understand that this is not victimless crime. Financial crime drives gun violence, property prices, the opioid crisis, institutional corruption, and more.

So how does Canada fare when it comes to combatting financial crime? And what more can be done to take concrete action against this illicit activity?

In the Macdonald-Laurier Institute’s latest paper titled Taken to the Cleaners: How Canada Can Start to Fix its Money Laundering Problem, MLI Munk Senior Fellow Christian Leuprecht takes stock of the state of enforcement of financial crime in Canada and prospects for improvement. Despite some renewed focus from Ottawa and the provinces, the study concludes that Canada has some way to go in showing that it is genuinely committed to tackling financial crime in Canada.

He adds that, “In theory there is some good will by federal and provincial governments to address the problem. In practice, lacklustre results are a function of meagre resources and insufficient policy attention devoted to the issue.”

Compared to peer countries, Canada is over exposed to money laundering risks. According to Leuprecht, this is a result of a lack of resources for law enforcement agencies and a lack of policy attention devoted to the issue. For instance, the study finds that the RCMP are often unable to follow up adequately, even on serious and urgent cases of money laundering, due to split priorities and strained resources. And when there is sufficient motivation and resources to act, Canada’s financial intelligence agency (FINTRAC) lacks the necessary authority to collect information and compel law enforcement to investigate.

One particularly acute issue that the study identifies is the lack of effort to address financial crime related to contraband tobacco. While law enforcement agencies have made strides towards busting and dismantling some smuggling rings, they are ineffective at following the money trail to recoup lost tax revenue and to investigate where these profits flow.

As Leuprecht writes, “with governments in Canada losing vast amounts of potential tax revenue, coupled with national and international efforts to reduce smoking rates, and given that illicit tobacco ranks among the highest threat risks for money laundering, Canada could be far more aggressive in controlling and combatting the illicit cigarette trade.”

The study examines the issue of contraband tobacco in Canada and the United States, comparing how the two jurisdictions have approached the problem and achieved different results. While the US has made concerted efforts and urged Canada to follow suit, Leuprecht doubts Canada’s commitment.

To overcome Canada’s weak approach to money laundering and other financial crimes, Leuprecht recommends a few policy changes, including:

“Most serious criminal organizations are motivated by profit; removing that incentive is the ultimate deterrent,” Leuprecht explains. “However… the actual resources and policy attention detailed in this study cast doubt on the federal government’s commitment to ensuring that law enforcement can effectively investigate, arrest, and convict suspects involved in financial crime.”

To learn more about money laundering and financial crimes in Canada and what options exist for federal and provincial governments to respond, read the full paper here.

Christian Leuprecht is Class of 1965 Professor in Leadership at the Royal Military College, Director of the Institute of Intergovernmental Relations in the School of Policy Studies at Queen’s University, Munk Senior Fellow at the Macdonald-Laurier Institute, Adjunct Research Professor at the Australian Graduate School of Policing and Security, and Fulbright Research Chair in Canada-U.S. Relations at Johns Hopkins University’s School for Advanced International Studies.