Building on what works for pharmacare: Sean Speer for Inside Policy 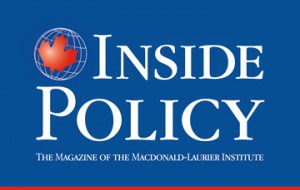 Instead of a one-size-fits-all government pharmacare model, we should focus on targeted, incremental reforms of the current system, writes Sean Speer.

The recent creation of a federal panel on pharmacare suggests that a new national model for public drug coverage has growing momentum. This week’s Council of Federation meeting of the 13 provincial and territorial premiers should dissuade Ottawa of the idea.

The case for pharmacare basically rests on the argument that Canada’s Medicare project is incomplete. The so-called “fathers of Medicare” (including Tommy Douglas, Lester Pearson, and Emmett Hall who chaired the Royal Commission on Health Services) made an error in the mid-1960s by excluding prescription drugs from public insurance coverage. Pharmacare proponents see their policy mission as correcting this initial mistake.

The argument isn’t completely unfounded. Pharmaceuticals were a small share of health-care expenditures back then. The industry was still rather rudimentary. The explosion of innovation and technological development was decades away. Drugs just didn’t matter that much at the time. Had Douglas, Pearson, Hall, and others known the drug spending would surpass doctors/physician services as the second biggest health-care expenditure (as it did in the mid-1990s) they may have chosen to cover it from the beginning.

But they didn’t. And instead through trial and error a different type of insurance model has evolved over the past half-century. In their zeal to complete the Medicare project, pharmacare proponents frequently ignore this fact. They shouldn’t.

The fact is that the current hybrid model – a combination of private insurance and targeted public programs – generally works well. There are certainly areas for improvement, as we’ve previously set out. Out-of-pocket spending is rising for certain parts of the population and there’s scope to design targeted public interventions to assist this cohort. But any reforms ought to build on the strengths of the current model rather than sweep it away in an ideological exercise.

Nearly 70 percent of Canadians receive prescription drug coverage through an employer-sponsored private plan. This includes adults and their dependents. More than one-third of total drug spending is covered by private insurance plans. A significant majority of the population and a considerable share of drug spending is being covered by the private market.

By most measures, these individuals are being better served than they would be under a mandatory government plan with less choice and personalized design.

The most important is the range of drugs covered – particularly as new, more specialized drug products enter the market. Research finds that private insurance plans cover a much wider range of drugs than public ones. As an example: One analysis of the 39 new drugs approved by the Department of Health in 2012, showed that 36 (92 percent) were covered by at least one private drug plan compared to only 11 (28 percent) that were covered by at least one public plan. And the average timeline for expanding coverage to account for these new drugs was 143 days for private plans and 316 for public plans.

It makes little sense to impose a one-size-fits-all government pharmacare model on this share of the population that’s generally well-served by the current system.

It makes little sense to impose a one-size-fits-all government pharmacare model on this share of the population that’s generally well-served by the current system. One’s ability to choose and design his or her own drug plan will only grow more important as new forms of personalized medicine become widely available. Yet pharmacare would necessarily limit one’s options and force us into pre-designed public plans focused principally on minimizing public cost. This isn’t a theoretical point. It’s the same reason why we have long wait times and poor access to medical technologies in our hospitals. Rationing in public drug coverage would just manifest itself as narrower formularies.

It’s a losing policy and political strategy to tell 24 million people that they must give up their prescription drug plans in exchange for poorer ones, especially since many of these benefits have been won through collective bargaining. One can envision various court challenges if the government(s) sought to impose a mandatory public model that disrupted the status quo for more than two-thirds of Canadians. We cannot and should not merely graft single-payer coverage onto the current regime which has taken shape over 50 years.

Especially since a large-scale pharmacare program would be massively expensive. Estimates put the price tag at approximately $20 billion per year. The Institute of Fiscal Studies and Democracy rightly points out that its adoption would require a combination of spending cuts and tax increases.

And the upshot of such a plan? We’d spend $20 billion and millions of Canadians would get inferior coverage from what they have now. This is a bad trade-off.

Instead, the provincial and territorial premiers should focus on targeted, incremental reforms that seek to support those who are overburdened by out-of-pocket spending. The Ontario government’s targeting of the OHIP+ program for those without private insurance under the age of 25 years old is a good example. There are also other steps that can be taken, including reforming how federal government subsidizes the purchase of private insurance and adopting co-payments in order to bring greater market discipline and to defray the costs of expanding public coverage to those who need it.

But the key is to build on what works rather than singularly focusing on what needs improvement. That ought to be the subject of discussion for the Council of the Federation.

We don’t know what Trump gave away in Helsinki: Marcus Kolga in New York Daily News

We don't know what Trump gave away in Helsinki: Marcus Kolga in New York Daily News