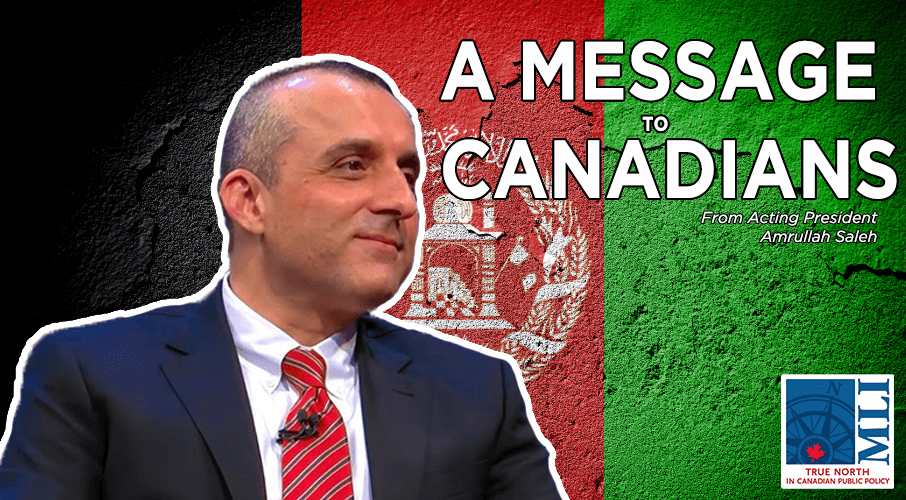 OTTAWA, ON (August 27, 2021): From the Panjshir Valley in Afghanistan, Amrullah Saleh, the former First Vice President and now acting President of the Islamic Republic of Afghanistan, has vowed to remain in the country and fight the Taliban. In an exclusive message to Canadians through the Macdonald-Laurier Institute, Saleh urges Canada not to give up on a country where so many Canadians fought, worked and died to bring a better life to Afghans.

“The Pakistan-backed Taliban have no legitimacy over Afghans, and should have no legitimacy bestowed upon them by Canada or the West,” stated Foreign Policy Program Director and Munk Senior Fellow, Shuvaloy Majumdar. “The Afghan constitution confirmed through six elections by the Afghan people provides an opportunity in Amrullah Saleh’s leadership, and in his appeal to Canadians to dispense with the axioms of the past and support the Afghan people in ensuring the country cannot become a haven for terror networks again.”

“This is a message to Canadians and through us to supporters of democracy and freedom everywhere. Amrullah Saleh reminds us all that he and others are still resisting invasion and repression — fighting for the values that first took Canadian soldiers to Afghanistan in 2001. Now more than ever, Afghans deserve our support,” says former Canadian ambassador to Afghanistan, Chris Alexander.

There are still many Afghans who believe in freedom and pluralism, and who are willing to keep fighting for these values. They need Canadians’ support more than ever.

Saleh does not prioritize an ongoing military commitment by the West to Afghanistan, instead, he articulates the kind of support the West could provide. Specifically, he asks Canada and allied nations to:

In his message, Saleh thanks Canadians for their work, sacrifice and support for Afghanistan. He rebukes those who claim that Afghans didn’t fight for their country against the Taliban.

“Millions and millions of Afghans aren’t going to flee, they want to stay. I want you generous Canadians, kind Canadians, to stay with the majority,” says Saleh.

MacdonaldLaurierInstitute · A Message to Canadians from Amrullah Saleh, Acting President of the Islamic Republic of Afghanistan

Webinar Panel Video: Securing the Flank – Defending Canada’s allies and partners from the Baltics to the Black Sea

A Message to Canadians from Amrullah Saleh, Acting President of the Islamic Republic of Afghanistan

A Message to Canadians from Amrullah Saleh, Acting President of the Islamic Republic of Afghanistan