“Something will have to give” on Old Age Security, Sean Speer tells CBC 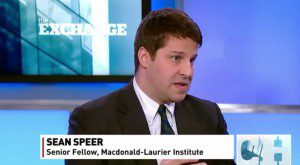 Prime Minister Justin Trudeau this week announced it was following through on its election pledge to lower the eligibility age back to 65. That reverses the decision of the previous government, which had in 2012 adopted a plan to raise it to 67.

Speer believes that raising the eligibility age to 67 was a sound policy move designed to ease fiscal pressure the government will face as Canada’s population ages in the coming years.

If the government is keen on lowering the retirement age, it will have to find another way to achieve the savings the previous government sought by altering Old Age Security.

“Something will have to give in the absence of this type of sensible reform”, says Speer.

What should we expect from budget 2016? Philip Cross weighs in on BNN

What should we expect from budget 2016? Philip Cross weighs in on BNN