David Perry, the author of a recently-released paper detailing the issues confronting the federal government as it attempts to fix defence procurement in Canada, took to the airwaves this week to discuss his findings. 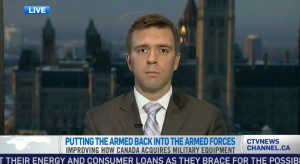 Perry spoke to CTV News Channel on Wednesday to discuss the findings of the report, titled “Putting the ‘Armed’ Back Into Canadian Armed Forces”.

“The military is facing a really bizarre situation, that it hasn’t in the past ever, that it’s got more money than it can actually use”, he told the program.

“Over the last six, seven years, the military’s been unable to spend almost a billion dollars each year of the procurement money that’s been set aside, despite pressing needs to re-capitalize almost the entire Canadian forces”.

The report was a joint production of MLI and the Conference of Defence Associations Institute.

Crowley speaks to CBC in Vancouver on social licence