On speech and conduct, repressive tolerance is a feature, not a bug: Bruce Pardy for Inside Policy

The country is polarized because one side rejects the legitimacy, indeed the existence, of the other.

in Columns, Domestic Policy Program, In the Media, Inside Policy, Latest News, Social issues
Reading Time: 3 mins read
A A 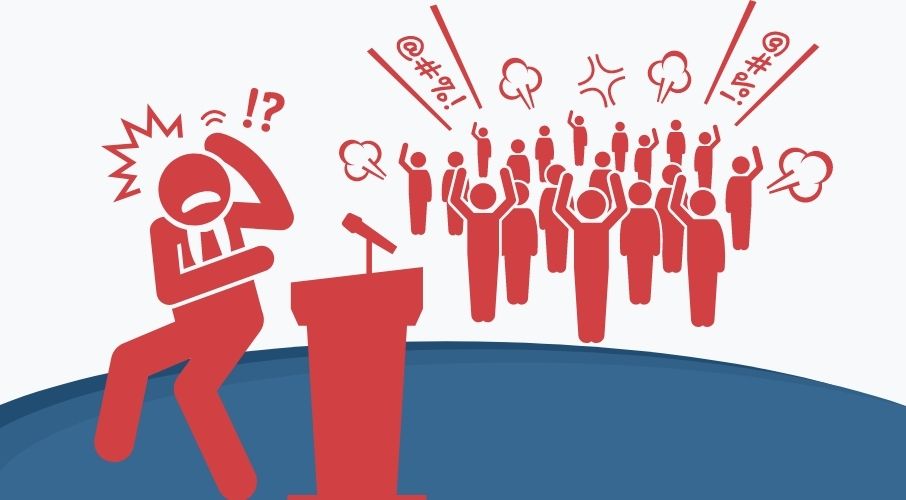 It’s okay to insult conservatives, truckers, and vaccine skeptics, but it’s not okay to insult Jagmeet Singh, the leader of the federal NDP. That’s the lesson to be taken from Acting Peterborough Police Chief Tim Farquharson. After protestors at a provincial election rally in Peterborough on May 10 called Singh a traitor, Farquharson called their actions “morally unacceptable” and their belief systems “reprehensible, unconscionable, and in some cases, criminal.”

Double standards on speech and conduct are baked into our current political order. Burning churches and blocking railways are blows in support of social justice, but peacefully protesting vaccine mandates constitutes a public order emergency. Defying lockdown rules is a threat to public safety when parishioners gather for church services in parking lots, but not when thousands gather for Black Lives Matter marches. Law abiding gun owners are vilified while minimum sentences for gun crimes are eliminated. The hypocrisy of our authorities is no accident. Their choices are deliberate and calculated.

“We live in a crazy world today that seems to have gone off the rails,” says James Lindsay, the leading American critic of the illiberal politics of the progressive left, “[I]t is being driven by a broken logic, and, for all the flaws on the right, that broken logic is centered in the no-longer-tolerant left.” That logic, according to Lindsay, is rooted in a single 1965 essay by neo-Marxist philosopher Herbert Marcuse called “Repressive Tolerance,” whose theme Lindsay encapsulates in one sentence: “movements from the left must be extended tolerance, even when they are violent, while movements from the right must not be tolerated, including suppressing them by violence.”

This is the world we now inhabit. If you are not on board with the prevailing program, your speech and behaviour must be crushed. Intolerance should extend to actions as well as to expression, Marcuse wrote, “true pacification requires the withdrawal of tolerance … at the stage of communication in word, print, and picture. Such extreme suspension of the right of free speech and free assembly is indeed justified … Different opinions and ‘philosophies’ can no longer compete peacefully for adherence and persuasion on rational grounds.”

Once upon a time, when they were cultural mavericks, liberals championed free speech. Establishment conservatives were the censors, urging limits on obscenity, blasphemy, and communist propaganda. In a free society, went the liberal argument, all must be able to express ideas and opinions no matter who has the reins of power. Freedom of expression protected the dissenter, the rebel, and the heretic from the orthodoxy of the prevailing view.

Now the shoe is on the other foot. Free speech is no longer needed to protect the left, whose sensibilities now prevail. Liberalism has morphed into the dominant ideology of woke progressivism, which rules government, mainstream media, universities, big corporations, public schools, public health authorities, and, increasingly, courts. It turns out that progressives were less interested in the principle of free speech than in promoting their own values.

You can’t miss it unless you avert your eyes. The Trudeau government, for instance, has repeatedly promised to pass legislation to monitor social media for “misinformation” and “hate speech.” A new orthodoxy is being established: speech consistent with progressive norms is legitimate, while contrary opinions are racist, alt-right, or violent; whether speech is objectionable depends in part upon the identity of the speaker and the subject; attacking European culture, whiteness, Western values, or Christianity is proper speech but defending them is beyond the pale.

In this era of repressive tolerance, the most exhausting, ineffectual political figure is the earnest conservative. Rather than condemning the illiberal liberal, who openly expresses an aggressively intolerant agenda, the conservative instead honourably refuses to believe it. We should stop political bickering, says Scott Aitchison, a candidate for the leadership of the federal Conservative Party, and instead respect one another. “Conservatives reform institutions,” says Jean Charest, a leadership rival who wants to preserve the CBC, “we don’t tear them down.” But the ideas championed by Marcuse and his intellectual comrades have already irredeemably overtaken most Canadian public institutions.

Our naivety is among the most useful, effective, and dangerous weapons in the arsenal of the woke. Chamberlains of our day cannot accept that Canada is now dominated by a leftist elite bent on the cultural transformation that they transparently promote. Those who bemoan polarization of the electorate have become blind to what is happening right in front of their eyes. The country is polarized because one side rejects the legitimacy, indeed the existence, of the other.

These are not your grandparents’ liberals. They mean what they say. Listen, and then ignore at your peril.

Bruce Pardy is executive director of Rights Probe and professor of law at Queen’s University.

Talkin’ in the Free World Ep. 8 – Olga Tokariuk with updates on the war in Ukraine

When it comes to postsecondary and hiring, it’s a matter of degrees: Linda Nazareth in the Globe and Mail

When it comes to postsecondary and hiring, it’s a matter of degrees: Linda Nazareth in the Globe and Mail