in Past Events
Reading Time: 5 mins read
A A 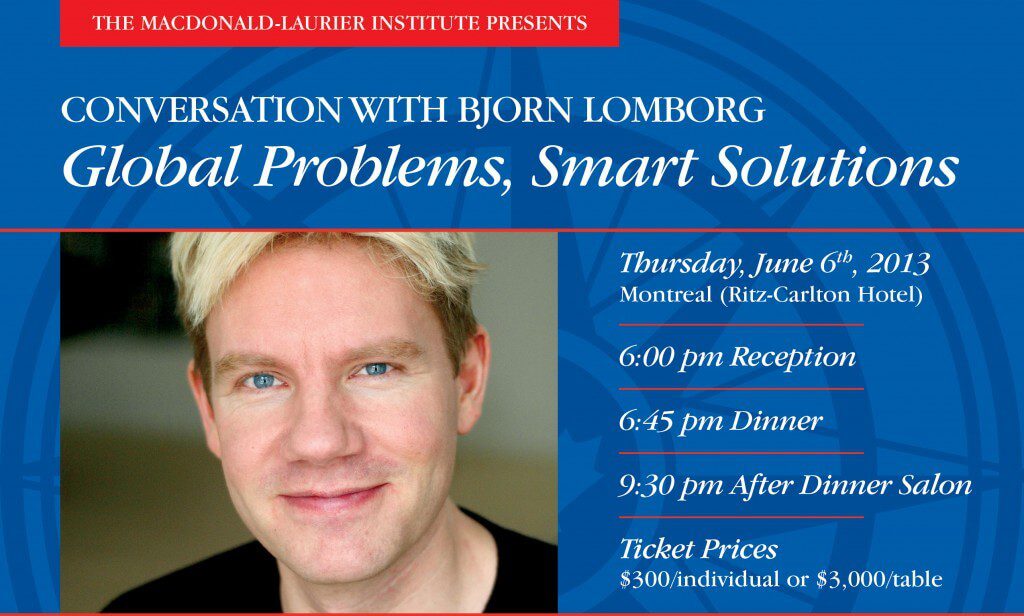 Bjorn Lomborg caught the world’s attention with his controversial book The Skeptical Environmentalist – focusing on why we should use our scarce resources to actually do some good, instead of simply trying to make ourselves feel better.

We at MLI were delighted to co-host Mr. Lomborg for his talk “How to spend $75 billion to make the world a better place” in Montreal on June 6.  Mr. Lomborg highlighted the need to achieve the best value for development dollars by basing policy decisions on sound, reasonable foundations.  Below is the column Bjorn Lomborg wrote for the Ottawa Citizen prior to his talk in Montreal.

How $75B can make the world a better place

The UN is pondering which goals to set for the next decades to advance human development and sustainability. On Friday a high-level panel including Indonesian President Susilo Bambang Yudhoyono, Liberian President Ellen Johnson Sirleaf and U.K. Prime Minister David Cameron will be revealing their ideas for what the world — and Canada — should do.

Let’s do the smartest we can. We can get a treasure trove of ideas from some of the world’s top economists. In a new book I’ll be presenting across Canada next week, these economists summarize humanity’s smartest ideas and best investments. Given that we have very limited funds, we need to prioritize: they generated ideas and then ranked the best ways to spend $75 billion more over the next four years to dramatically help hundreds of millions of the world’s poorest people.

The world spends some $125 billion annually on development aid from USAID and others. Beyond that we spend tens of billions on global efforts like peacekeeping forces, climate change policies, conservation and research on vaccines and more resilient crops.

Yet, as Bill Gates pointed out, it is clear that more is needed. A billion people still live in abject poverty, 2.3 billion don’t have access to modern energy, the world is still not at peace, we’re not anywhere near tackling global warming or threats to biodiversity.

More often than not, priorities in spending become dictated by the loudest groups with the best PR. Campaigners of all stripes use powerful images and stories to capture our attention and influence aid budgets — from toppled buildings in Bangladesh, to devastation caused by droughts and storms, to hunger episodes in far flung places.

We need to ask the hard-headed question: Where can we get the biggest bang for our buck?

With the Copenhagen Consensus think tank, I asked 50 of the world’s top economists where we could do the most good. They prepared research on nearly 40 investment proposals in areas ranging from armed conflicts and natural disasters to hunger, education and global warming. The teams that drafted each paper identified the costs and benefits of the smartest ways to spend money within their area.

They presented their efforts to a high-level panel of five top economists, including four Nobel laureates. The panel members were chosen for their expertise in prioritization and their ability to use economic principles to compare policy choices.

The panel indicated that if spent smartly, $75 billion could go a long way to solving many of the world’s challenges.

The single most important investment, according to the panel, would be to step up the fight against malnutrition. New research for the project by John Hoddinott of the International Food Policy Research Institute and Peter Orazem of Iowa State University focuses on an investment of $3 billion annually. This would purchase a bundle of interventions, including micronutrient provision, complementary foods, treatment for worms and diarrheal diseases, and behaviour-change programs, all of which could reduce chronic under-nutrition by 36 per cent in developing countries.

This matters not just because more than 100 million children could start their lives without stunted growth or malnourishment. It matters much more, because new, long-term research shows that the benefits of such programs would stay with them for life: their bodies and muscles would grow faster, their cognitive abilities would improve, and they would pay more attention in school (and stay there longer). Studies show that, decades down the line, these children would be about three times more productive, make more money, have smaller families, and begin a virtuous circle of dramatic development.

Ultimately, when all benefits are translated into economic terms, every dollar spent on malnutrition will likely do $59 worth of global good.

So while micronutrient provision is rarely celebrated, a wide-scale effort could make a world of difference.

Likewise, the high level panel found that just $300 million would prevent 300,000 child deaths from malaria. In economic terms, the benefits turn out to be 35 times higher than the costs. Similarly there are amazing investments to be made for tuberculosis treatment, childhood immunization and an HIV/AIDS vaccine.

As people in the developing world live longer, half of all deaths this year will be from chronic diseases in Third World countries. Getting low-cost drugs for acute heart attacks to developing countries would cost just $200 million, and prevent 300,000 deaths, doing $25 worth of good for each dollar spent.

Another amazing idea is to spend $2 billion annually in research and development to increase agricultural output. Not only would this reduce hunger by increasing food production and lowering food prices; it would also protect biodiversity, because higher crop productivity would mean less deforestation. That, in turn, would help in the fight against climate change, because forests store carbon.

These ideas may not be “rocket science,” but orchestrated more widely, they can make a huge difference for people today and in the future. And more importantly, we need to get everyone, from high school pupils to UN ambassadors to start thinking about how to get the most bang for our buck. It’s a simple principle — and applied to policy problems, it will help build a better tomorrow.

Bjørn Lomborg is author of The Skeptical Environmentalist and Cool It, director of the Copenhagen Consensus Center, and adjunct professor at Copenhagen Business School. Lomborg’s new book, How to Spend $75 Billion to Make the World a Better Place will be published on June 1. He will present it in Ottawa on June 6, 7:30 a.m., at the Château Laurier (lomborg.com/events).

“Conversation with Bjorn Lomborg” is hosted by the Macdonald-Laurier Institute, ranked one of the top three new think-tanks in the world in a global survey, in partnership with Leah Costello and the Bon Mot Book Club.

The Macdonald-Laurier Institute is Canada’s leading independent, non-partisan institute on public policy, and the only think-tank with a national focus based in Ottawa. MLI exists to make poor public policy unacceptable by challenging political and opinion leaders by providing strong, thoughtful analysis and commentary on the issues that matter nationally to Canadians.

Why the Liberals need a Margaret Thatcher