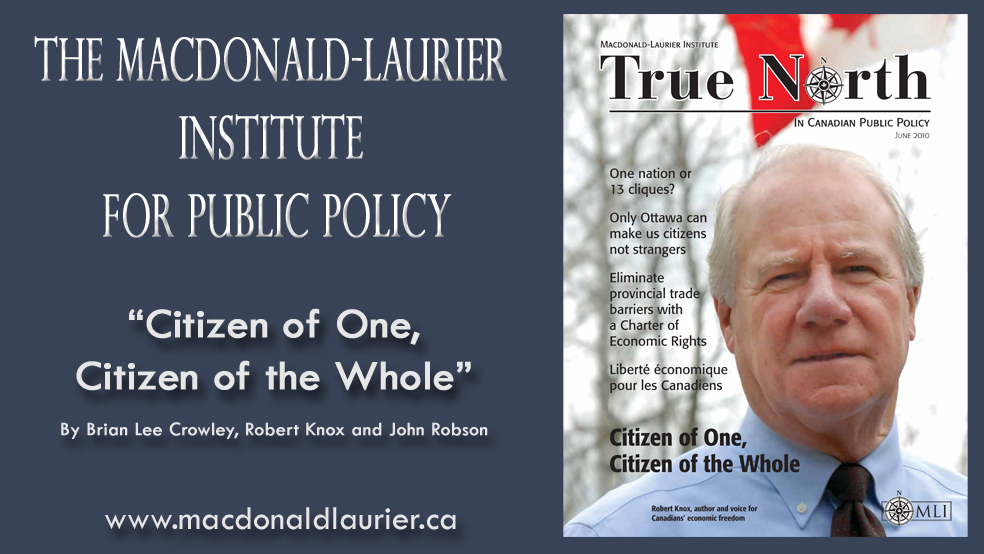 Citizen of One, Citizen of the Whole: How Ottawa can strengthen our nation by eliminating provincial trade barriers with a charter of economic rights, by Brian Lee Crowley, Robert Knox and John Robson.

If Canada is our common home, why are so many doors locked inside it? The federal government has the legal power and moral duty to ensure that there are no restrictions and impediments to the free movement of people, goods, services and investment in Canada. Not only are these barriers costly and impair the efficiency of the Canadian marketplace, but they interfere with and erode the basic rights of Canadians. Establishing that Canadians have a right to move, work and do business anywhere in Canada would be the much-delayed fulfilment of our founders’ dream of a great nation and of the deal they struck in 1867.

Provincial and federal measures and policies that impede and restrict trade do considerable economic harm. But they do something far worse. They make us less of a nation. Our national anthem celebrates “the true North, strong and free” and our first French-speaking prime minister, the Liberal Sir Wilfrid Laurier, boasted that “Canada is free, and freedom is our nationality.” When governments trample on our right to move about, make a living, and use our talents as we think fit anywhere in our national home, they don’t just make us poorer or less free, they turn us from fellows into foes and from citizens into strangers.

The economic case for national action is also compelling. It makes no sense to have impediments to trade and economic activity between provinces simply because there are no national rules to stop them. If barriers are intended to make one province or territory richer by making others poorer they usually fail and we all suffer, but anyone who fails to play the protectionist game is a chump. Only the national government can ensure that Canada has an open, efficient, predictable and stable domestic market where all Canadians are treated fairly and equally.

As in every well-designed federation, Canada’s Constitution firmly and distinctly assigns power over internal trade to the central government. The Fathers of Confederation clearly wanted to make Canada one economic space, to prevent a harmful protectionist “beggar-thy-neighbour” free-for-all. And the courts have generally upheld this vision. Only a failure of federal nerve has prevented the forceful exercise of this clear power. It is high time for the federal government to introduce a sweeping statute to ensure that no government rules or policies unnecessarily restrict the free movement of goods, services, labour and capital, and give individual citizens clear legal remedies against such restrictions.

We recommend that, since the federal government already has the power to get rid of most of the barriers to free trade and mobility within Canada, an Act of Parliament should create The Economic Charter of Rights for Canadians that would be faithful to the vision of our Founding Fathers while respecting the constitutional division of powers and responsibilities between the provinces and Ottawa. We further recommend the creation of an Economic Freedom Commission with the power to investigate breaches of the Economic Charter of Rights on its own initiative as well as in response to complaints. Giving this body power to bring its own legal actions would dramatically benefit individuals and small businesses that cannot afford to launch costly litigation against provincial authorities.

If Canada is our common home, we should not be shut out of many rooms or forced to empty our pockets before entering them. The federal government has the duty and the power to undo this harm. In the 2007 Throne Speech the federal government promised to “consider how to use the federal trade and commerce power to make our economic union work better for Canadians” and in its 2008 election platform the Conservative Party declared itself “prepared to intervene by exercising federal authority if barriers to trade, investment and mobility remain by 2010.” The federal power exists. The domestic barriers continue. The historical vision and the present moral duty are clear. Why are Canadians still waiting to have their freedoms vindicated in this vital field? What is the government waiting for?

In a video released today by the Macdonald-Laurier Institute, co-author Robert Knox provides an in-depth look into MLI’s latest study, Citizen of One, Citizen of the Whole.

In conversation with colleague John Robson, Bob tells us what an Economic Charter of Rights could mean for all Canadians. He reminds us how our “sense of being Canadian” is diminished by all the petty barriers that inhibit personal mobility and economic freedom today. With his background in negotiating on internal trade issues and his expert knowledge of the impact these restrictions have on the jobs and lifestyle of Canadians, Bob insists that the time to act is now. Watch the video (in two parts) below…