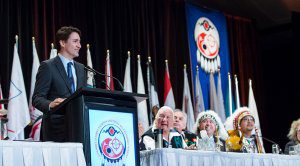 The Truth and Reconciliation Commission (TRC) has stated that 6000 Indigenous children remain unaccounted for under the residential school system, in addition to an estimated 4000 murdered or missing Indigenous women and girls. In light of the announcement of the discovery of the remains of 215 Indigenous children at the former Kamloops Indian Residential School, that estimate may prove conservative.

Canadians have been groomed to think of these deaths as natural, but should there be a criminal investigation? And who would conduct it? Those are difficult questions that may explain why the Canadian government has yet to follow through on the TRC’s calls to action to allow for the proper finding and recording of children who died at residential schools.

Prime Minister Justin Trudeau rose in the House of Commons to acknowledge that the tragedy uncovered in Kamloops is, vaguely, “the fault of Canada.” The search of unmarked graves at other former residential school sites will need to identify, and appropriately and sensitively return, the children’s remains to grieving families.

DNA analysis, while not always precise, holds out the best prospect of identifying and linking thousands of remains of Indigenous children from across the country to living family members.

In Canada, the analysis and storage of DNA material could become part of the Relatives of Missing Persons Index, one of a host of disparate DNA databanks controlled by the RCMP under the larger National DNA Data Bank. That, however, will not do justice: Who controls these genetic identifiers into the future is as important as what information can be gleaned for closure in the present and potential prosecution in the future.

Relations between groups wax and wane over the years. Who knows for what purposes DNA material may be used in two or three generations? As DNA science evolves, it is impossible to anticipate what additional information may been extracted from DNA samples or how that information may be used.

When used to identify family members, DNA analysis is only as good as the databases against which the samples are compared. The country needs a pan-Canadian database to enable DNA from unidentified persons to be matched against cold cases, missing persons, as well as individuals and family members who volunteer samples. The US has a highly successful precedent with the University of North Texas’s National Missing and Unidentified Persons System (NamUs), which works in partnership with the National Center for Missing & Exploited Children. The system has thereby restored some dignity by matching anonymous victims with their families, but its success depends on the database of DNA matches.

Indigenous peoples may not trust government with their DNA. However, they may come forward and volunteer their DNA more readily if they know that these samples are held by their community and used only in ways authorized by that community. Possibly feeding some or all data into the Combined DNA Index System (CODIS), the FBI’s system for DNA identification, to ensure a comprehensive continental approach to identifying missing Indigenous persons, could improve results. To ensure that the requisite technical and laboratory expertise is independent of the broader system, the effort would need to be housed at a university or a private lab with a strong track record in forensic sciences and mitochondrial DNA evaluation.

Rather than surrendering their genetic markers to the federal government, Indigenous peoples could take control of genetic material found at this and future locations and determine, on their own terms, how DNA samples and the information gleaned from them is to be used. Such control would allow Indigenous groups to assert their sovereignty and retain control over their own bodies and communities.

Todd Hataley is professor at Fleming College and a former RCMP federal investigator.

Christian Leuprecht is class of 1965 professor in leadership at the Royal Military College, director of the Institute of Intergovernmental Relations at Queen’s University and senior fellow at the Macdonald-Laurier Institute.

Webinar Panel Video: A Pacific Realignment – Why Canada needs to work with its partners in the Indo-Pacific

Webinar Panel Video: A Pacific Realignment - Why Canada needs to work with its partners in the Indo-Pacific